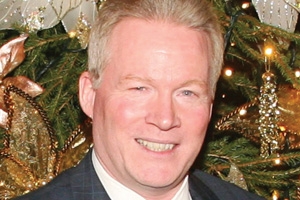 The cruise line's US boss visited the UK last month for the company's agent awards. Lee Hayhurst finds out why Seabourn values the UK market and travel agents so much

Carnival Corporation’s ‘six-star’ cruise line Seabourn is on a mission to encourage agents to adopt a luxury travel strategy even if they do not do much cruise business.

Speaking exclusively to Travel Weekly on a visit to the UK in December, John Delaney, senior vice-president of marketing and sales, said agents could take advantage of the booming ??luxury sector.

The operator launched a UK version of its online Seabourn Academy training in May last year following a February launch in its US home market.

To date, 150 UK agents have been trained on the system, adding to the 1,000 who have graduated in the US.

“One of the great things about it is it’s not just about Seabourn. It really teaches agents how to sell luxury.

“Luxury is still one area of the travel market that’s booming for agents as more contemporary easy-to-book-yourself alternatives have gone online or direct.

“Our type of travel still requires the expertise of a travel agent. These are very demanding, well‑travelled guests who have high expectations.”

Seabourn is convinced that every agent has a potential customer for its brand of super-luxury cruising.

Delaney said the key was having the confidence to recommend the operator to potential customers.

“It’s having the confidence, speaking the language, understanding what they are looking for, their needs, and ??how to put it together,” said Delaney.

One of the more important aspects ??of being able to sell ??travel, Delaney added, was being a destination expert and knowing ??what the latest trends are. He cited Burma as one of the hottest destinations for luxury travellers since it opened up to visitors this year, and said Antarctica was also on the wish list of most travellers.

Delaney said UK guests are some of Seabourn’s most loyal, with those who are won over by the brand likely to become repeat customers. They could also serve as “advocates”, helping the line attract more interest.

To facilitate this, Seabourn has been supporting agents who hold events for small numbers of potential customers, sometimes in partnership with venues such as local country house hotels.

The line has also been targeting UK agents, including those who do not specialise in cruise, in regions where it traditionally has not derived many bookings.

This has seen a significant extension of distribution for the line, whose capacity over the past three years has grown by 217% with the delivery of three new-generation ships, Seabourn Odyssey, Seabourn Quest and Seabourn Sojourn.

In addition, the move to base the line’s UK headquarters in Carnival House in Southampton with sister operator Holland America Line has also helped extend its reach.

Delaney said the UK accounts for about 30% of Seabourn’s international customers, making it the second-largest source market behind the US, which accounts for just over half of all its business.

The Australian market is growing fast, the line has a good foothold in Germany, and it is also working to grow markets in the Benelux countries, said Delaney.

When Seabourn took on its new 450-guest ships – double the size of its original three – Carnival Corporation chairman Micky Arison made no secret of his view that the line needed to become a more significant contributor to the parent company’s bottom line.

“The corporation believes in Seabourn and the three ships were a terrific investment for the company,” he said.

“Across the industry people are realising cruising is a great way to travel and good value. There has been price fluctuation in all travel.

“There was a little nervousness about the economy in general, and for North Americans air fares were expensive.

“But one thing about our demographic, which is true even in a downturn, is travel is not something they stop spending on.

“For us, what’s nice is it’s been a year and a half since we launched our last new ship and we have no new ones on order so we have time to absorb the capacity.

“I’m really happy with the amount and quality of business from the UK, but I still definitely think there is room