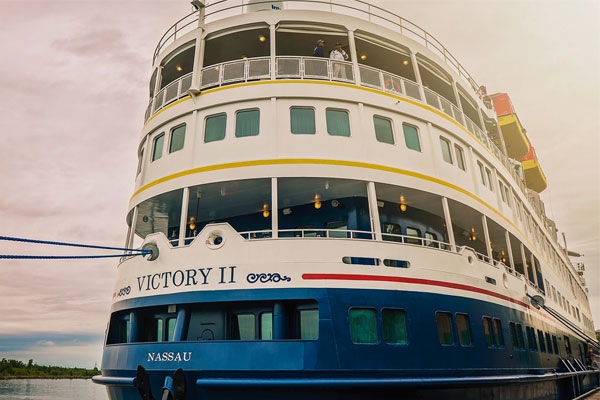 Victory Cruise Lines will deploy its twin ships Victory I and Victory II on all five of America’s Great Lakes and the Canadian Maritimes in 2020.

The identical 202-passenger ships will tour the lakes’ seaways, harbours and remote ports from May to October next year.

Victory I will operate an 11-day Chicago to Toronto itinerary with prices from £4,895 per person, all-inclusive and including flights. It will call in Port Colborne, Niagara Falls, Cleveland, Detroit, Sault Sin Marie, Manitoulin Island and Mackinaw Island.

Victory II will operate a nine-day Chicago to Niagara Falls sailing with ports of call at Muskegon, Green Bay, Mackinaw Island, Detroit and Cleveland. Prices start from £3,995 per person, all-inclusive with flights.

American Queen Steamboat Company (AQSC) acquired Victory Cruise Lines in January, with the ships undergoing updates and refurbishments before they set sail again in May 2020.

The 200-passenger vessel with be the line’s third ship and debut with 20 Alaska voyages in May 2021.

It will feature 93 suites, 68 of which will have balconies, two restaurants, an open-deck dining area, observation lounges, piano bar, library, gym, spa, swimming pool with pool bar and Jacuzzi. Bookings will open in July 2019.

AQSC’s UK general sales agent, Light Blue Travel, is also offering a UK-exclusive Around the States in 40 Days itinerary for 2020.

The cruise will feature a combination of AQSC’s Mighty Mississippi cruise on American Duchess, followed by a Chicago to Toronto cruise on Victory I. The 40-day all-inclusive itinerary is priced from £11,695, with international flights, shore excursions, airport transfers and six nights hotel accommodation.

There are currently three steamboats, with working red paddlewheels, in the AQSC fleet, including American Queen, which was featured in Channel 5’s Cruising with Jane McDonald. A fourth ship, the American Countess will make its inaugural voyage in April 2020 and will operate on the Mississippi River.

Light Blue Travel’s managing director Rupert Thomson urged agents to contact him to find out about training opportunities. He said: “Cruising in the USA is perfect to suggest for clients who have already ‘done’ European cruises and want something different.

“Agents who know our product tend to earn more commission as they know how to upsell – one agent started off with an enquiry for an eight-day Lower Mississippi cruise and ended up selling the Mighty Mississippi an epic 23-day cruise sailing from New Orleans to Minneapolis – the sale was worth £29,000 – think of the commission.”