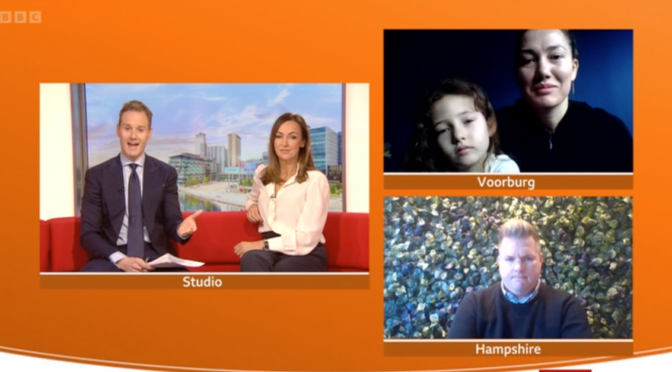 Classic Collection executive Si Morris-Green appeared on BBC Breakfast this morning, along with a Ukrainian family due to stay with him as part of the new ‘Homes for Ukraine’ scheme.

He and his husband Don have been matched with Niyara Mamontova and her seven-year-old daughter Elenor, who fled their home in Kharkiv in northeast Ukraine after the Russian invasion began in February.

Her husband – a surgeon in Kharkiv’s main hospital – has stayed behind in the city.

Niyara joined the BBC Breakfast interview from Voorburg in the Netherlands, along with Elenor, to tell viewers about how they had escaped the bombing – and had found Morris-Green via Facebook.

“I had an ordinary life…happily living there when [the invasion] happened on February 24,” said Niyara, a software development manager.

“The day before, I celebrated the birthday of my friends.

“Then [next day] I heard the bombs. I thought, ‘this is nuclear, I am going to die in a few seconds’.

“We gathered with my husband, we did not know what to do…everyone was driving in different ways.

“Kharkiv was surrounded by the Russian army.”

They lived and slept underground for three days but Elenor caught pneumonia.

They heard jet fighters and bombing, and the school by their house was destroyed. The family then walked to the edge of the city and had to leave her husband to work in the hospital before spending three days on the road to Lviv, then made their way to Krakow in Poland.

She thanked the people who had housed the pair during their long journey, as well as Morris-Green, a father-of-two who lives in Hampshire, and is director of agency sales and marketing at Classic.

He told the BBC: “We were heartbroken, seeing this unfolding and felt helpless. With this scheme, we can help.

“We say Niyara’s post online…and got chatting throughout the day.

“We cannot sit by and watch this unfold – we have warm houses with water and food and a safe environment, it is the least we can do.”

He said he hopes the official match will be sorted by Friday and urged the UK government to ensure the travel process for refugees is made quicker.

Asked by presenter Dan Walker about Morris-Green’s offer of help, Niyara said: “It is surprising and amazing. I never thought I would be a refugee.

“More than two million people have already fled Ukraine. It is horrible. Europe helps us as much as they can, I really appreciate that and people of Ukraine won’t ever forget that.”