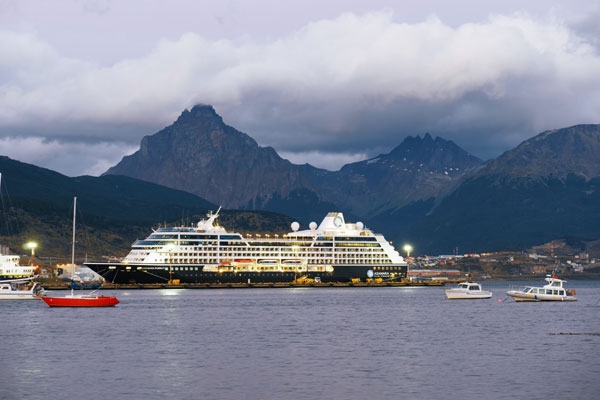 Azamara is considering a new build ship to expand its fleet.

But speaking in New York this week, he told Travel Weekly: “Princess knows that I have expressed an interest in their R-Class ship as it’s been all over the press, but they haven’t called. But Princess selling is not our future. We would consider a new build.”

The line currently operates Azamara Journey, Azamara Quest and Azamara Pursuit, which it launched in the UK last year.

Azamara this week also unveiled what it claims to be the “largest collection of pre and post-voyage land excursions in the cruise industry”, via a collaboration with escorted tours operator Cox & Kings,  dropped ‘Club Cruises’ from its name and unveiled a new logo.

Pimentel said: “I think that what we are doing deserves more product as it’s so differentiated. Our current ships are full and so profitable that the only business choice is expansion.”

Acknowledging that the shipyards like Meyer Werft, Fincantieri and Chantiers d’Atlantique, which are building “mega vessels”, were currently full, he said: “One of those is not going to bump a big ship for a small one, but there are other smaller yards. We have done the business case, we have done the math.”

Pimentel claimed the launch of land tour programmes for of pre and post-cruise ports and up to 88 options mid-voyage, would set the line apart from competitors.

“This is at the sweet spot of attracting new cruisers. The cruise industry is producing hundreds of new ships. 30 million travellers took a cruise last year; a decade ago this was just 19.8 million. We are growing all the time but the kind of differentiation we are now offering helps shipping as a whole. This will attract land-based clients to our ships.

“Azamara is playing in a unique space. We have become the no-cruise cruise. We are not offering cruise the same as others. This is about venturing beyond the sea. We are the ultimate destination line, and what we’re offering is the ultimate experiential travel product.”

Pimentel said Azamara was a “hybrid travel product”. He said this was already happening in Alaska where guests combine a cruise with a land tour, but that Azamara would now offer the same in Europe, Asia, South America and Africa.

The average price is £2,500 per person and agents can earn a flat 10% commission on all land options.

Negotiated commission rates for cruise sales remain the same. Tours will go ahead if at least six people are booked on any one excursion.

Pimentel said specialist activity tours, such as golf, would operate on a transactional fee per person booked.

Pimentel believes 30-35% of guests will be adding a land programme to their cruise within two years.

He said the move offered agents the chance to earn more money if they upsell their guests to the land tour as well as the sailing, and has produced a trade guide to all land tours available which agents will receive.

Pimentel stressed: “You can still buy cruise-only. You can add on land. You cannot currently buy land-only from us.”

Asked if that might eventually be an option, he said: “It’s conceivable but that’s not the plan at the moment.”