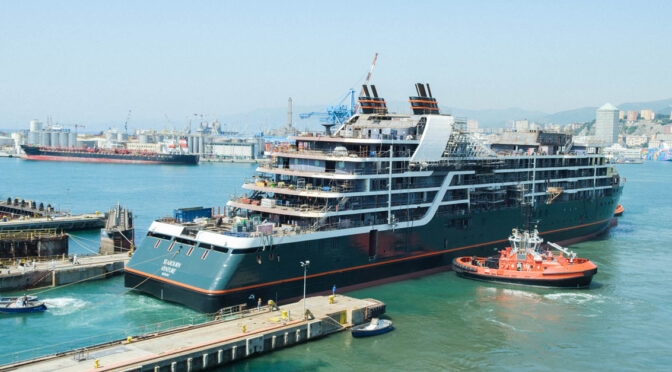 Ports of call include Hornvika, Skarsvag, both Norway; Murmansk, Russia; and Nome, US.

Seabourn Pursuit will offer a 23-day Journey Across the Northwest passage, departing from Reykjavik, Iceland, on August 26, 2023. Prices start from £35,999.

The line’s second expedition ship, due to launch in February 2023, will call into Sisimiut, Ilulissat, both Greenland; Dundas Harbour and Croker Bay, both Canada.

Both sailings are available to book now.

Seabourn Pursuit will operate in destinations including the Arctic, Greenland, Iceland and Canada during its maiden season from March 2023.

Its debut season will begin with a 12-day Wild & Ancient Scotland & Iceland pre-inaugural voyage, departing from Amsterdam on March 23, 2023.

The vessel will then operate a 14-day Lands of Fire & Ice maiden voyage on April 4, 2023, from Reykjavik.

Seabourn Venture’s second season will cover the Arctic, Scotland, Norway and the Russian Arctic. The season will start on May 12, 2023, with a 10-day Wild Isles of Scotland and Iceland voyage from London to Reykjavik.

Robin West, senior vice president, expedition operations and planning, explained that Seabourn Venture and Seabourn Pursuit would mirror the rest of Seabourn’s ocean fleet in terms of their design.

“This is an expedition product but still part of the Seabourn brand,” he added.

The line started operating expedition sailings in Antarctica in 2013, before announcing plans to build two purpose-built expedition ships in 2018.

“We’ve been in this space for quite some time and obviously we’ve taken this experience and we’re now pinning this experience on two purpose-built ultra-luxury vessels,” said West.