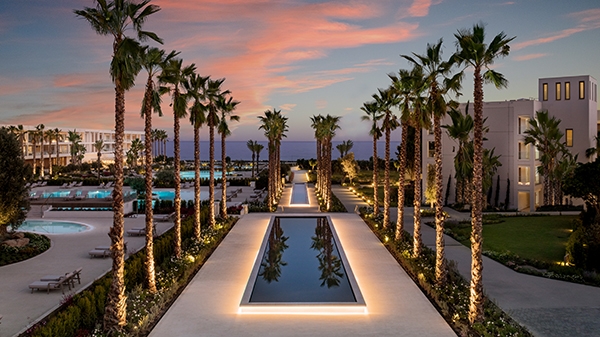 Four new properties in Greece, Spain and Portugal have been acquired by Sani/Ikos Group plus the expansion of two existing resorts in deals totalling €520 million.

The group’s new properties and the expansion of existing resorts are expected to create more than 2,600 jobs.

The Greek hotel company confirmed the acquisition of the former Blau Porto Petro on Majorca which will be transformed for €100 million into a five-star all-inclusive resort under the Ikos Resorts brand.

The Alfamar Beach Resort in Algarve, Portugal is to undergo a €140 million redevelopment and will re-open as the all-inclusive Ikos Cortesia in 2024. The new property will include 448 rooms, suites, bungalows and villas.

New properties have also been acquired on the islands of Corfu and Crete.

A former Club Med Resort in Corfu will be transformed at a cost of €125 million on the same bay as sister property Ikos Dassia.

The Ikos Odisia will open in 2023 with 395 new rooms, suites and bungalows.

More than 30 plots of land have been acquired on the bay of Kissamos, to create the company’s first resort on Crete at a cost of €125 million to open in 2025 with 400 new rooms, suites and bungalows.

The group also continues to focus on expanding its existing properties with the further development of both Ikos Andalusia in Spain and Porto Sani in Greece.

The new three and four-bedroom villas will be the largest across all Ikos properties and the development will also include new pools and restaurants.

The second phase of Porto Sani’s development is due for May 2022 with an additional investment of €13 million to include 50 new suites, two restaurants, outdoor pools, and a new area for children with a creche.

The investment plan aims to contribute to strengthening local communities, combating unemployment and enhancing the hospitality offering across the Mediterranean, according to the company.

It aims to achieve a sustainability net-zero target by 2030, as well as zero plastic and zero waste by 2024.

All resorts source 100% renewable electricity, all wastewater is recycled, and a network of more than 40 organisations is supported with the aim of biodiversity conservation on land and sea, as well as helping vulnerable children and families.