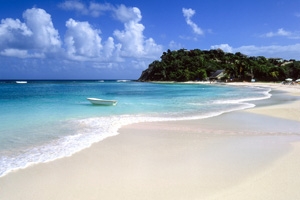 Antigua and Barbuda is expanding its luxury product in a bid to attract more high-end travellers, according to the Caribbean destination’s tourism chief.

A new airport terminal will open in March 2015 at V.C. Bird International Airport, featuring more VIP lounges and high-end duty free shops, plus Virgin Atlantic has increased the capacity of its Upper cabin from 13 to 33 seats to cope with increased demand for premium air travel to the destination.

Speaking at World Travel Market, Antigua and Barbuda Tourism Authority chief executive, Colin James, said: “The high end of the market has been working really well for us. We are on target for double digit growth this year and the forecast for next year is just off the chart – but more importantly we are growing our revenue as well, and this is where the luxury market has such tremendous value.

“We are going for the aspirational traveller. Antigua is home to celebrity second homes for the likes of Oprah Winfrey, Eric Clapton and Silvio Berlusconi, and that couples with our very high end product in Jumby Bay, Carlisle Bay and Hermitage Bay. A significant number of our hotels are in the four or five-star category, so we want to be able to lock in that side of the market.”

The Caribbean islands will see increased airlift in the coming season with daily British Airways flights year-round – a 15% increase in seats compared with last year – plus four Virgin Atlantic flights each week instead of three, and a longer season from Thomas Cook, which is starting its Manchester charter flight in November rather than December this year.

As well as showcasing the country’s luxury product, next year’s agent fam trips will focus on the weddings and honeymoons market. The twin islands have the highest wedding rate per capita in the world, with 1,200 to 1,300 weddings taking place each year.

James added: “It’s one of the easiest places to get married. There’s no residency requirement so you can get off a cruise ship and get married and then get back on the same day.

“We are working with all our partners to make sure agents get the most up-to-date training and that high performers are taken out and introduced to the product. Next year we will have a huge push in fam trips to show our agents what we have.

“We really appreciate the business that agents give us, but I also want to look at how we can incentivise them further, especially the agents who are delivering such high value for us.”

UK visitor numbers for January to September 2014 are up 3