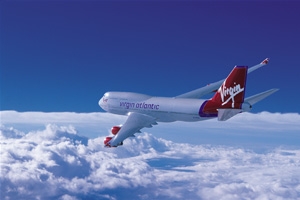 Virgin Atlantic will unveil a new Upper Class cabin this spring, the result of a £100 million investment, as it seeks to boost its share of business travel from Heathrow.

The carrier’s new seat and cabin remain under wraps, but Virgin Atlantic describes them as “cutting edge”.

Virgin was due to announce the new Upper Class from Heathrow today, with chief operating officer Steve Griffiths insisting it will establish Virgin as “best in class” and create a “wow factor” when passengers enter the cabin.

The new seat won’t go on display until the spring when Virgin launches the cabin on its latest Airbus A330 operating the daily morning service from Heathrow to New York JFK.

The cabin will then be installed throughout Virgin’s Heathrow fleet over three years.

The new Upper Class will include an “enhanced seat” and service, “fine dining” and a new bar by the aircraft entrance.

Griffiths said: “This is not just about the seat. It involves new product, new in-flight entertainment and investment in the service. It will absolutely make Virgin Atlantic the best in class. This is about creating a gap [with our competitors].”

The cabin and service were developed with the help of 1,200 frequent flyers, who took part in surveys and in some cases joined workshops, with a group of 50 spending time sleeping in the seats at the cabin development facility.

Griffiths said: “We’ve really involved our frequent flyers, taking feedback from surveys, workshops and direct experience. We’ve learned how the personal space works and what customers want out of their time on board. It has shaped our thinking.”

He added: “We’ll be talking a lot about the new seating, but we’re not revealing it yet.”

Griffiths said: “There are elements of this investment we believe business passengers, in particular, will appreciate.” These include express supper menus offering lighter food and faster service that will leave more time for work or sleep.

The changes will be supplemented on the ground in New York by Virgin’s new clubhouse at JFK, due to open in March.

Virgin Atlantic is already in the middle of a £50-million upgrade of its Gatwick fleet and a £1.38 billion investment in new aircraft.

Griffiths said: “The economic conditions are challenging, but we’ve had a good start to 2012 and it’s going to be an exciting year for Virgin. We have significant investment coming through.”