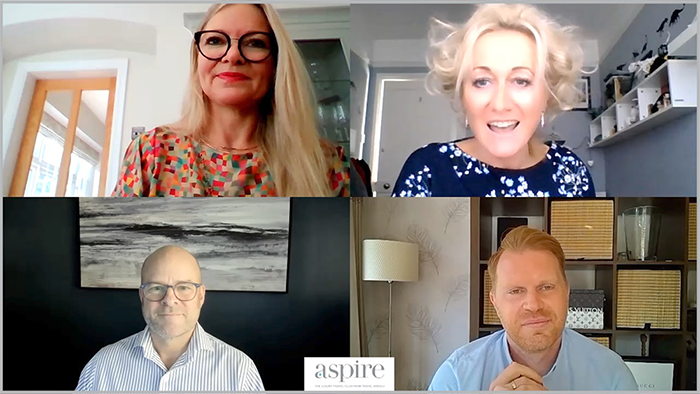 Luxury travel brands have said they will continue to use a hybrid approach of in-person and virtual channels to connect with agents and consumers post-pandemic.

Speaking on a webcast with Aspire, Bernard Carter, senior vice president and managing director for EMEA at Oceania Cruises, said it would be “folly” for companies not to continue to harness digital platforms and virtual events when engaging with partners and customers.

He said: “The whole digital channel has really opened something up for us.

“The average age of the cruise guest is from 60 upwards, and the elder generations have really engaged with digital over the past 18 months so it would be folly to actually miss that as a channel moving forward.

“Having live events, on demand recordings and places where people can go and watch at their own leisure but still interact with the main platform, is a big boom for us and we’ve found that with our ongoing activities and plans, we're going to move slightly towards face-to-face, but with the possibility of having a digital interaction within that so that we can take an audience of what would normally be 60 people and turn it into 600.”

She said one of the operator’s “biggest successes” during Covid-19 had been its live virtual events, which it ran weekly throughout the pandemic to keep partners engaged. The brand sent out cookery kits for a live cookery class with a chef in Tuscany and ingredients to make a gin and tonic to enjoy online together, alongside cheese and wine nights with Forte Village and live villa walk-arounds at sunset.

“We got to thousands of agents that we would never have got to if we were just on the road,” she said.

“We've learned a whole new way of doing business. It will definitely be hybrid for at least another six months until attendance levels drop but to be honest, I think they're here to stay now.

“It's just a more efficient way of doing things. We can record them and put them up on our portal as well so people can get access to them at any time.”

Kerzner International, whose brands include One&Only and Atlantis, The Palm, also implemented an online strategy during the pandemic, turning its usually face-to-face Kerzner Roadshow into a virtual offering.

“It allowed us to reach out to people that we would never talk to when we would go and do what we would call our traditional week out on the road,” said Kerzner’s UK account director, Craig Jeffs.

“This roadshow allowed us to speak to concierge agents, one-man-bands, high street agents. I don't know if it's an arrogant thing to say but I think we all thought that we were doing the best job with the tools we had [pre-pandemic]. And I think the one silver lining that Covid has given to us is that there are so many other avenues now to communicate with and, as Bernie said, it would be folly not to continue that momentum.”

All three brands said their relationships with the trade had become stronger since the pandemic due to their online strategies.

Carter said: “Historically, you'd have communication channels with the trade, you have your personal relationships with your account managers and commercial contacts, and you'd have the other channels that you go with either digital or events. But this has been more about support - telling the agents at times of real genuine need, ‘We're here for you, we'll do what you need, we'll help you.’

“It's giving them time to breathe, it's letting them know that we're right next to them. It's regular phone calls. It's picking up the phone to people that you wouldn't normally speak to every week to make sure they're okay and show that you actually care. I think that's been a big thing.”

Jeffs said switching conversations from business-talk to support in the peak of the crisis had resulted in better collaboration and had helped Kerzner International adapt to the changing needs of the luxury traveller.

“We always took for granted that the support we gave as a hotelier or a trade partner was perfect. But it's not always perfect. So actually speaking to the people that are on the frontline helped us evaluate what we needed to do and it 100% makes everything stronger.”

Sustainability factor ‘a given’ among luxury travellers