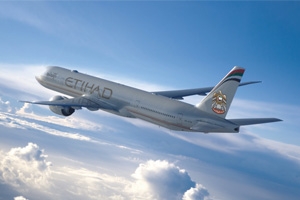 Tourism Australia and Etihad Airways are to quadruple their joint marketing spend in the 2014/15 winter season to promote Australia to international travellers.

This doubles the total value of the original three-year marketing agreement signed in December 2013 to A$12 million.

A major broadcast initiative, to air in the UK in early 2015, is also being planned by the partners.

One of the first initiatives funded under the expanded agreement was the recent UK launch of Tourism Australia’s Restaurant Australia campaign, where Australia House in London was transformed into an Australian-themed ‘pop up’ restaurant.

The airline’s support for Restaurant Australia continues this week when it will fly more than 20 of the world’s top food and wine influencers to Australia to take part in the campaign finale – an Australia-wide media fam trip and a gala dinner at MONA in Tasmania on Friday.

Tourism Australia managing director John O’Sullivan, pointed to the airline’s recent Perth launch and decision to deploy one of its first Airbus A380 superjumbos between Abu Dhabi and Sydney as evidence of the airline’s continued expansion plans and commitment to the Australian market.

“Etihad Airways is one of Tourism Australia's most important aviation partners, playing a critical role feeding traffic to Australia's key gateways, via the airline's Abu Dhabi hub,” he said.

“The work we’ve done so far with Etihad Airways has proved extremely successful for both parties, including targeted marketing campaigns in the UK, Germany and France, as well strong support for key Australian trade events such as this year’s Australian Tourism Exchange held in Cairns.”

Etihad Airways’ president and chief executive James Hogan said: “Australia is one of our most popular destinations, and its appeal among business and leisure travellers – particularly from the UK and Europe – contributes greatly to our Australian operation.

“The partnership with Tourism Australia has delivered some innovative campaigns and strong passenger numbers over the past 12 months, and our decision to invest more in marketing Australia is driven by a desire to continue thi