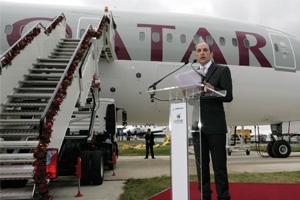 Qatar Airways will be the first airline to launch services on the Dreamliner. Ian Taylor speaks to chief executive Akbar Al Baker

Qatar Airways will launch daily Boeing 787 services from Heathrow to Doha in September, becoming the first carrier to operate the new aircraft from the UK.

The carrier’s chief executive Akbar Al Baker confirmed he aims for a September start date. He said he would announce the Heathrow launch “once we have a firm date of delivery”.

The first of Qatar Airways’ 787s was on display at Farnborough Air Show last week. But the Dreamliner returned to the US last Thursday to have the in-flight entertainment system installed.

Qatar hopes to take delivery of the aircraft by early September, allowing it to begin services from Heathrow towards the end of the month.

The airline operates five services a day from Heathrow to its Doha hub. It is likely to operate the 787 on the 06.30 departure from Doha to Heathrow and return to Qatar in the afternoon.

The 15.05 departure from Heathrow connects at Doha with services to the Far East and Australia and Qatar intends to put its second 787 on services to Australia.

The carrier launched its second service to Australia this month, to Perth, operating on Mondays, Wednesdays and Fridays with the mid-afternoon departure from Heathrow linked to connecting flights.

Qatar has 30 787s on firm order and options on another 30. It has resisted declaring its 787 service from Heathrow will be the first from the UK, but there appears only one other carrier with an outside chance to beat it. Air India has the aircraft on order and, in theory, could take delivery in time to pip Qatar.

Yet it is understood Boeing is unlikely to release the aircraft to Air India in time. Japanese carriers All Nippon Airways and JAL already have the 787 in service, but have shown no sign of interest in flying the Dreamliner from Heathrow.

The 787 is striking on the ground: light and airy, with an unusual sense of space.

The high ceiling and elegant baggage compartments are one reason; the enlarged windows and lack of blinds another; the subtle but enhanced lighting a third.

But it is the performance in the air that will mark out the Dreamliner. Its wings flex astonishingly on take-off and landing. It looks extraordinarily graceful, especially alongside the lumbering A380.

Qatar’s business class cabin will have 22 seats in a 1-2-1 configuration, with two extra seats at the back. The seats lie at angles to one another, with lots of leg room – the most I’ve seen in the latest round of premium cabin upgrades.

There wasn’t time to lower the lie-flat bed, but the seat looks set to raise the business-cabin bar. There is a 17-inch entertainment monitor and extensive work space in front of and around the seat as the tray table combines with a side try to make a sizable desk.

Economy seats are set out in a 3-3-3 configuration with a 31-inch pitch, which sounds small but feels more comfortable because of the slim seat back. A 10.6-inch monitor, iPhone-style control and USB port are standa