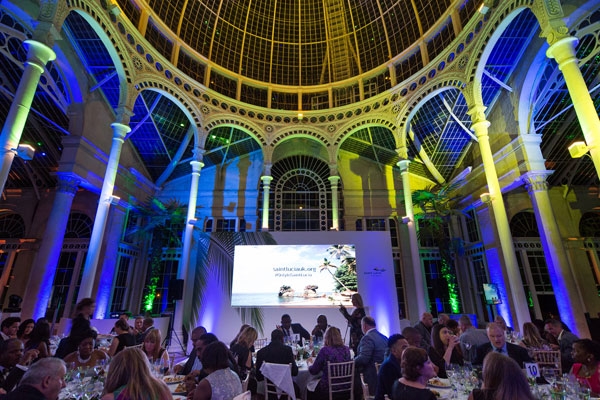 Brexit is an opportunity for greater collaboration and trade with Commonwealth countries like Saint Lucia, according to the island’s new tourism minister.

Dominic Fedee, who was appointed to the cabinet following elections in June, said he was confident the UK travel sector would make a success of Brexit.

Speaking at the annual Saint Lucia Showcase gala dinner in west London last week at which awards were handed out to the island’s top UK trade partners, he said:

“The room tonight is full of the talent and creativity to overcome the challenges of Brexit and we can look forward to the future with optimism.

“It’s an opportunity to become better partners, to build a better industry. Now is a good time to engage on a new trade agreement.”

Brexit will be less challenging to overcome than 9/11 and the 2008 financial crash, Fedee predicted.

“Some people say tourism is fickle, but I want to say it’s resilient, as history has shown in recent times,” he said.

This led to the Lomé Convention, which gave countries such as Saint Lucia time to make the transition from being reliant on agriculture to tourism before being fully exposed to global competition.

At the height of its powers, Saint Lucia exported 175,000 tonnes of bananas a year, now that has slumped to just 16,000 tonnes, 80% of which come to the UK and are sold under the Fairtrade brand.

Tourism is now Saint Lucia’s main revenue earner and Fedee thanked UK trade partners for every booking, saying the sector was vital to the island’s prosperity.

Saint Lucia is the UK’s fifth most popular Caribbean destination but one of only three showing a decline this year, a drop blamed on the closure of the three-star Smuggler’s Cove property.

This hotel was demolished and a new property, the Hideaway at Royalton St Lucia exclusive to Tui, has been built on the site which is four to five star and less mass market.

• Saint Lucia has a range of new developments underway, with two new hotel openings in the first quarter of 2017, followed by a further 1,200 rooms within the next five years

• A new campaign creative will be launched later this year to showcase Saint Lucia’s diversity and attractions including activities, attractions, excursions, culture and natural beauty that appeals to families and couples

• Saint Lucia’s September/October campaign will push for early summer 2017 bookings, especially for the family market and the tourist board will continue to incentivise and educate the trade ?

Within the next seven years the island expects to have 2,000 new rooms built catering for a diverse range of visitors including couples, families, all-inclusive and adult-only.

And Fedee said he was confident Saint Lucia would return to growth with Thomson Airways due to start flights next year, but warned:

“We are a new government and we are at the point of defining what we want to be. Allow too many three-star all-inclusives and we could undermine or cheapen the destination which has grown organically as a luxury destination, but there is a need to fill seats.

“We are going to have to diversity to keep the planes serving the island. We need more capacity at the 3.5-star level without compromising the luxury feel Saint Lucia has got.”

Fedee said he was in favour of an open skies-style approach in the Caribbean as the region faces increased competition from destinations like in southeast Asia where countries are collaborating on airlift and visitor visas to create multi-centre tour opportunities.

“We did it during the cricket World Cup,” Fedee, the brother of West Indies cricketer Sergio Fedee, said. “We are still getting there to fully optimise the value and the role tourism can play to drive our economies.

“There have been calls for an open skies arrangement for a long time but we have not acted on it. We need the political will to move in that direction to have more creativity to allow people to island hop.

“Establishment of ferry services and lifting of landing fees and taxes would make it much more attractive. Regional transportation is lacking. It’s easier, and quicker, for me to get to London than it is to get to some Caribbean destinations.”

Having witnessed the UK trade’s biggest supporters of Saint Lucia handed awards at the gala dinner, Fedee said agents would always be valued and he gave thanks for every booking which helps Saint Lucia to build schools, hospitals and provide other vital services.

“There will always be a role for the trade and travel professionals,” he said. “It’s one of the oldest professions and it will continue to be important in this era of the internet which is a time for opportunity for the trade. We do better when there is a partnership.”

This partnership approach has extended in recent times to the issue of taxation, with the UK government eventually recognising the unfairness of the APD flights tax regime on the Caribbean.

Although APD remains, the banding system has been reviewed so that the Caribbean is no longer in a more expensive zone compared to rival destinations in the US.

“We are very pleased that the UK government took a look at this issue. We were lobbying strongly. It’s very difficult to compete when there are too many taxes.

“We are looking at a new tax regime to drive investment in the island. We believe taxes are often an impediment in terms of growth. We believe the focus should be on growth and volume rather than on taxing existing business activities.”

Ultimately what Saint Lucia feels it can offer, which some other emerging rival destinations can’t, is political stability and an innate understanding of the British with no cultural, language or religious barriers.

“We have to be more creative as a destination and as a region. We cannot take the market for granted and we have to constantly look to redefine ourselves.

“But I’m confident the Caribbean has a superior product. We are best-placed, because of our understanding of the British, to provide holidays to suite their taste and style. Yes, people are looking for something different, but that should not be underestimated.”