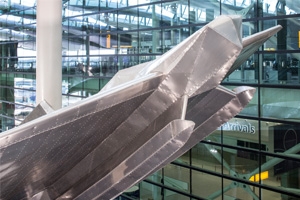 The Queen is set to officially open Heathrow’s revamped Terminal 2 on June 23. ??

The £2.5 billion new terminal is part of the London hub’s ongoing transformation which has taken five years to complete.

Terminal 2 will be home to 23 Star Alliance airlines as well as Aer Lingus, Virgin Atlantic Little Red and Germanwings.??

The building is characterised by an undulating steel framed roof which provides it with natural light. A spacious new ‘Covered Court’ connects the main transport links to the terminal.

“Passenger experience and comfort have been placed at the centre of the design process which emphasises natural lighting and intuitive way-finding,” Heathrow said.

Development director John Holland-Kaye said: “We are proud that Her Majesty The Queen has agreed to officially open Terminal 2: The Queen's Terminal, the latest stage in Heathrow’s £11 billion transformation.

“The new Terminal 2 stands on the site of the previous Queen’s Building, and the official opening on June 23 recognises the long association with Her Majesty The Queen.”

Star Alliance chief executive Mark Schwab added: “In June this year we will ring in a new era for our customers, member carriers and employees at London Heathrow.

“The purpose-built Terminal 2 : The Queen’s Terminal - will be our home and will offer a superior travel experience to our customers, create new business opportunities for our member carriers and provide an improved working environment for employees.”

The airport yesterday unveiled Slipstream (pictured), claimed to be Europe’s largest privately funded sculpture, as a centerpiece of the new terminal.

An estimated 20 million passengers a year will pass under the structure which is suspended 60ft above ground and is 260ft long.

The old Terminal 2, opened by The Queen in 1955, was demolished after 54 years of service. It was Heathrow's first terminal, originally called the Europa Building and was designed to deal with 1.2 million passengers a year. By the time it closed in 2009 it was handling 8 million pass