Plans for UK 'spaceport' to be set out 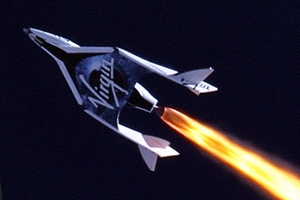 The government is to use this week’s Farnborough Air Show to outline plans to make the UK a leading player in the global space industry, with the first spaceport operating by 2018.

RAF bases at Kinloss and Leuchars, along with Lossiemouth, home to a helicopter rescue centre, are understood to be frontrunners for the spaceport, which could see space tourists blasting-off from Scotland within four years, the Times reported.

Although the sites would be primarily used for satellite launches, they could be used by Virgin Galactic (pictured) and US company XCOR to launch space tourism flights.

Lossiemouth was previously indentified by Virgin Galactic as a potential site for launching its space-planes. Three other Scottish locations under consideration are understood to be Campbeltown, Prestwick and Stornoway.

Newquay in Cornwall and Llanbedr in Wales are the only sites outside Scotland expected to make the list, to be officially unveiled this week.

The government plans to choose a site by next April, more than six months after the independence referendum. The Scottish government says independence would enable Scotland to cash in on the space industry.

Sir Richard Branson’s commercial space travel project, Virgin Galactic, has promised to launch its first flights from New Mexico at the end of this year at £120,000 for a 150-minute flight.

But science minister David Willetts was reported as saying that the cost could one day be accessible to a much wider audience.

“What we’re seeing is a shift from space being dominated by big national public technology programmes through a host of entrepreneurs moving in. One thing entrepreneurs do is they bring down cos