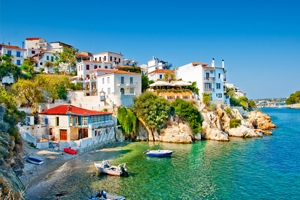 International visitors to Greece are expected to reach a new record this year of 21.5 million.

The forecast rise from 20.1 million in 2013 is projected to result in increased tourism earnings of €13 billion against €12.2 billion last year.

The number of UK travellers to Greece rose by 32% between January and August compared to the same period in 2013, according to new figures from private sector tourism organisation Marketing Greece.

UK arrivals were up 43% from London and 61% from Edinburgh in the first eight months of the year.

The total number of international travellers to Athens was up by 528,000 in the period, marking a return to levels last seen in 2009 when the economic recession in the eurozone began to bite.

With almost 60% of international travellers visiting Athens in the second half of the year, the total annual increase is expected to surpass 800,000.

Marketing Greece managing director Iossif Parsalis added: “The tourism industry in Greece has seen healthy growth in recent years. The Greek capital, in particular, has now made an impressive rebound and the latest figures for Greece overall are a cause for real optimism.

“These figures are reward for the investment that has been made across the country – by Greece’s carrier and international airlines, Athens international airport, hotels and service providers.

“The rise in visitor numbers demonstrates that, beyond the unsurpassable Greek sun and beach holiday so beloved of Britons, travellers are now discovering that the country offers an incredible diverse range of value-for-money experiences, anything from hiking on Crete in spring and skiing in northern Greece in winter, to shipwreck-diving in summer and private countryside culinary classes in