Holidaybreak has agreed a £312 million takeover by Cox & Kings that will remove the company from the London stock market.

The Holidaybreak board said it would recommend the deal to shareholders, with the acquisition expected to go ahead by the autumn. The company said shareholders owning almost 32% of shares had already accepted the offer.

Holidaybreak shares soared?in the run-up to the deal, showing a rise of 48% over four weeks.

The Cox & Kings deal prices Holidaybreak at just over 432p per share, valuing the company at £312 million. However, the company’s debt – close to £130 million in its most-recent annual report – means the deal will be worth closer to £440 million.

An education, activity and leisure travel group based in the UK, Holidaybreak has its headquarters in Cheshire and sites all over the UK and Europe. Cox & Kings is a luxury tour operator with a UK office in London but a parent company in Mumbai. The company is privately owned, but listed on the Mumbai stock exchange. 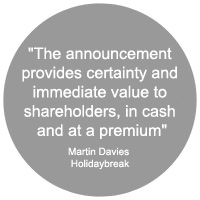 Holidaybreak chief executive Martin Davies said: “I am proud of the progress we have made towards transforming Holidaybreak into an education-focused business, both through expansion into the pan-European education market through the acquisition of Meininger, and by building on our high quality brands.

“While the board of Holidaybreak was confident significant value could have been generated for shareholders over time through implementation of our standalone strategy, today's announcement of the recommended acquisition provides certainty and immediate value to shareholders, in cash and at a premium.

“It also presents an exciting opportunity for Holidaybreak's customers and employees to benefit from being part of an international travel company.”

Cox & Kings director Peter Kerkar said: “The acquisition of Holidaybreak marks an exciting step for Cox & Kings. It adds new product areas and markets which provide us with attractive opportunities to leverage Cox & Kings' global network and accelerate the development of both Holidaybreak and Cox & Kings' businesses.

“We very much look forward to working with the Holidaybreak management team who have helped to develop the company into a leader in its business areas.”

The takeover will be carried out in the name of Prometheon Holdings (UK), a wholly-owned subsidiary of Cox & Kings.

The UK-based education and activity travel group reported a turnover close to £462 million last year. Its core markets are school and adult groups and families. Holidaybreak operates in several other European markets.

It includes the leisure brands Superbreak, Eurocamp and Keycamp, education brands PGL, NST and Meininger, and activity brand Explore. Hotel breaks were its biggest revenue driver in 2010, just ahead of education. But its business is fairly equally divided between the various divisions.

The company employs more than 3,000 staff, mostly at various sites in the UK, but has offices around continental Europe. PGL is based in Ross-on-Wye and employs 2,000. NST is based in Blackpool, Explore in Farnborough, Superbreak in York and the camping division in Northwich. Holidaybreak was founded in 1973.

Holidaybreak is listed on the London Stock Exchange, with no majority shareholder. Most of the leading investors are banks and insurance houses.

With a history stretching back to 1758, Cox & Kings is probably the oldest brand in travel.

The operator grew with the British Empire, organising travel and equipment for British Army personnel, with an increasing focus on India from the second half of the nineteenth century.

Its parent company is based in Mumbai, where it is privately owned but with a listing on the Mumbai stock exchange.

The group has subsidiaries in the US and Australia as well as the UK.

Cox & Kings in the UK is a luxury long-haul tour operator, based in London and offering tailor-made, family, group and private tours to India, Africa, the Middle East, Australia and