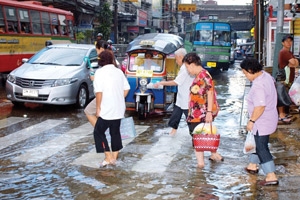 Cocooned in the five star luxury of the Shangri-la hotel in the Bangrak district of Bangkok, it's almost hard to believe that outside Thailand is grappling with the worst floods in five decades.

But the imminent threat to the Thai people is just outside the window. The hotel sits on a half-a-mile stretch of Chao Phraya River – and for the past two days I have watched it feed, swell and encroach.

All eyes are firmly on the river. While the streets just outside are dry, the Thai people are bracing themselves for the floods heading towards the centre of the capital.
At first glance, it seems like there is nothing out of the ordinary. A group of Thai teens are laughing and playing chess on the street corner just around the door from the hotel.

Then you see the sandbags piled high in front of the jewellers. Just a couple of steps further a Thai man in his late 20s is skillfully crafting a concrete barricade to protect his shop. A few streets away and a car has been raised on breeze blocks.

But for now people here are still smiling – and being resourceful. The café on the corner is selling black, green and white wellies alongside its noodles for between 150 to 250 baht. Jauwaa Singkornwat, 50, had the back-up of her son Singkorn, 17, today as his school has closed.

Jauwaa said: “It’s a bit scary. We know our business will suffer but we know we are all going to suffer the same. We don’t want to barricade the front of the shop because people won’t come in. The thing we fear most is if the electricity is cut off.”

A few doors up, a girl is standing in the doorway of the supermarket starring at the front page picture of a newspaper with a large picture of people wading through floods – behind her the shelves where the water is normally found are bare.

Tea Tea, 26, is on the pavement of his parents’ jewellers watching a workman smooth a new, two feet high grey concrete barricade that he hopes will protect their livelihoods from the floods.

“The first thing I do each morning is look at the river,” he says. “That’s why today we built this. I’ll keep looking at the river and prepare."

Nida Chow, 60, peeps out from the pharmacy further along the road. She’s watching her daughter Ling Ling, 25, helping a workman to build the concrete defence in front of the pharmacy, which is more than 100 years old and been in her family for four generations.

“I have to do this because the Governor cannot protect us,” she says. "They said they would protect us 100% and now we are told the floods are coming.?We haven’t got enough information and each day it changes.?

“Tomorrow we will have to close the shop so we have time to protect our homes – and I shall pray for my family and friends, all of us.”

Back at the hotel, the emergency plan is already in full swing. More than 5,000 sandbags, a concrete wall, water pump and generator are already in place. Food, fresh water and medical supplies for 2,500 people for 14 days have been stockpiled.

Many of the hotel’s staff who live in the Pathum Thani and Nonthaburi provinces have already been affected.?

Vice president and general manager Thierry Douin and his team have just returned after venturing out in a high-sided vehicle piled high with survival kits for staff who have been cut off by the floods in Don Muang.

The kits contain instant noodles, fresh water, milk, and toilet paper among other things – anything they think might help. Other members of staff have been invited to take refuge at the hotel or apartments the hotel has rented nearby.

“It was really hard to get through such high waters, we picked up people on the way who we could help. We had to deliver the kits to reach those people who couldn’t get to us or wanted to stay to protect their homes.”

First on their list was a woman who works in their flower shop. “She’s lost everything – her home has been flooded with dark, dirty water – it was higher than her knee and everything was ruined,” Douin told me.

“She is refusing to leave because her son lives above and she won’t leave her blind dog. She was crying when we got there – but she presented me with a flower for coming.

“One of the homes we visited, they had seen a python swimming in the water. My biggest fear is what is to come – the disease that water brings with it. There's a consensus that it will take 45 days before the water receeds.

“I’ve told my management to make sure they check on all our staff regularly – our first priority is our staff and guests. I’ve also asked our doctor to brief us on how we can help.

“It’s heartbreaking and incredibly upsetting but many people are still in high spirits – many are still smiling, but that’s the Thai people, the Thai spirit. We're resilient and we will bounce back."