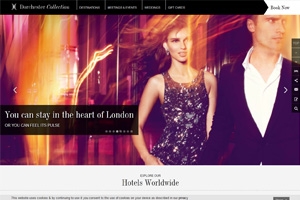 The chief executive of the Dorchester Collection - currently the focus of a world-wide boycott by prominent members of the fashion, media and travel industries – has spoken out in response to the activists for taking detrimental action against the company’s employees and suppliers, as well as the business.

Christopher Cowdray was speaking in response to the protests, led by the likes of comedian Stephen Fry and American chat-show host Ellen DeGeneres, against the implementation by the Sultan of Brunei of a series of harsh new Islamic laws. The controversial sharia law could see the severing of limbs for theft and stoning to death for adultery and homosexual acts.

Virgin chief executive Richard Branson voiced his support for the shunning of the Dorchester Collection’s 10 hotels in the UK, US, France, Italy and Switzerland when he tweeted: "No @Virgin employee, nor our family, will stay at Dorchester Hotels until the Sultan abides by basic human rights.”

The Dorchester Collection is owned by the Brunei Investment Agency, the sovereign wealth fund which is the investment arm of the country’s ministry of finance.

Cowdray said that while the group recognises people’s concerns, the boycott should not be directed at the hotels or dedicated employees. He suggested that the views of the protestors should be placed in a broader perspective.

“Most of us are not aware of the investors behind the brands that have become an integral part of our everyday life, from the petrol we put in our cars, to the clothes we wear, to the way we use social media, and to the hotels we frequent. European companies across the board are funded by foreign investment, including Sovereign Wealth Funds.

Cowdray went on to say that the Dorchester Collection abides by the laws of the countries where it operates, while other countries’ laws do not affect the policies that govern how the group runs its hotels.

“Our reputation, which has been built on service and integrity, speaks for itself. We do not tolerate any form of discrimination, we never have and we never will. Our policies are far removed from the politics of ownership.”

Cowdray said that while the company was going through a challenging time, it was “deeply touched” by the tremendous support it has received from our guests and long-standing business partners who recognise that Dorchester Collection hotels are part of the fabric of their local communities.

“We will continue to honour their iconic heritage and remain committed to our core values of integrity, equality and