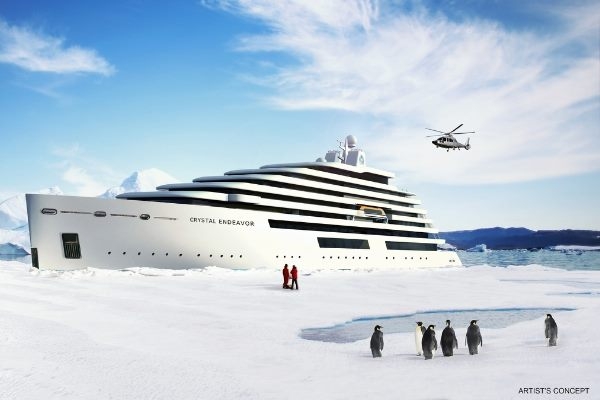 Crystal Cruises is to build what it claims will be the world’s first purpose-built polar class mega-yacht.

The luxury line’s first-ever expedition ship, Crystal Endeavor, is due to enter service in August of 2018.

With a Remote Operated Vehicle used extensively in the offshore industry, expedition cruises will be organised to see sunken galleons, warships and passenger ships, such as the Titanic at 12,500 feet, Crystal claims.

The vessel will be the first purpose-built Polar Code compliant yacht in the world, according to Crystal.

This will enable Crystal Endeavor to cruise in Polar Regions during the summer and autumn in medium “first year” ice.

It will also be fitted with the state-of-the-art offshore dynamic positioning technology, with computer-controlled systems to automatically maintain the ship’s position with its own propellers and thrusters.

This will allow the vessel to float above coral reefs without using anchors, which can damage the underwater terrain.

The vessel will compete with a similar giant ‘discovery yacht’ being built by Scenic Cruises. Scenic Eclipse is also due to enter service in 2018 to sail in the Arctic and Antarctic.

Crystal Endeavor will cruise in the Artic; then follow the route of migrating whales along the coast of the Americas and Europe to Antarctica during the winter.

Along the way, the ship will visit remote islands in the Atlantic and the Pacific Oceans, which standard cruise ships seldom call or cannot access.

Crystal Endeavor voyages will open for booking in late 2016. Steel cutting for the ship will begin May and with delivery in August 2018.

Crystal president and chief executive Edie Rodriguez said: “With [new yacht] Crystal Esprit, we discovered there are many guests, young and young at heart, who enjoy sports at sea and discovering remote islands, and as the interests and age of luxury travelers increasingly vary, we will continue to expand our collection of luxury travel options.

“Crystal Endeavor will cater to a particularly daring audience, one who values luxurious comfort and amenities as much as life-changing