Analysis: Holidaybreak and Cox & Kings are no odd couple

At first glance, Holidaybreak and Cox & Kings make an odd couple. They are strong, independent companies in their own right, but who would have predicted a marriage before news of their love interest this week?

Holidaybreak is a specialist in school trips, short breaks and camping and caravans in the UK and on the Continent. It is headquartered in Cheshire.

Yet the?tie-up is not crazy. The document outlining the offer explains: “Through expansion into adjacent business areas, Cox & Kings seeks to maximise its service offering to an enlarged customer base.

"The combination will provide Holidaybreak with a platform to expand internationally by offering the company’s products to Cox & Kings customers in India, the rest of Asia and Oceania ... Holidaybreak’s education business will capitalise on the latent demand for European education programmes and facilities fast emerging in India.”

In an odd phrase, the document points out: “In these new geographies the peak periods for outbound travel coincide with the European off-peak travel season and as a result the seasonality of Holidaybreak’s businesses will be reduced.”

It notes: “The acquisition represents a transformational step for Cox & Kings, providing scale and critical mass in key international regions. The complementary nature of the two businesses will diversify Cox & Kings' revenue streams.” 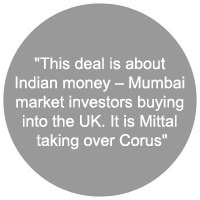 The key to the deal is India - its rapidly advancing economy, booming outbound travel market and English-speaking population’s thirst for education.

The companies are close in size, although Holidaybreak is bigger, yet it is a straight cash acquisition. Cox & Kings had a market capitalisation of £373 million at the start of this week. Its assets were valued at £285 million at the end of March when the company reported an operating income of £69 million and pre-tax profit of £27 million. It is not Tui Travel.

Holidaybreak reported revenue of £461 million in the year to last September and a pre-tax profit of £26 million. The Cox & Kings offer, embraced by the Holidaybreak board, values the group at £312 million.

This is a deal about Indian money – Mumbai market investors buying into the UK. It is Mittal taking over Corus. In a tabloid paper it might be headlined ‘The Empire strikes back’.

Two points are of interest. First, given the cigarette-paper difference in size between the companies, the deal is of necessity financed by borrowing.

Cox & Kings, or rather its subsidiary Prometheon Holdings (UK) Ltd – referred to in the offer document as Bidco – will finance the takeover with two letters of credit: one for £200 million and one for £121 million. The company has standby letters of credit for somewhat more, provided by Axis Bank of India.

The deal will leave Cox & Kings with quite a debt - although not as first appears both the £321 million (or £331 million with the full standby facility) as well as the £140 million of debt on Holidaybreak’s books at the end of March. The latter has been accounted for in the new credit facility. That debt is not small for a company reporting an annual profit of £27 million, swelled by the £26 million a year brought by Holidaybreak, but it is manageable.

Second, the Cox & Kings offer is clear on what would break the deal: a regulatory hold up. The offer document states the deal is conditional on “it being established ... that neither the Office of Fair Trading nor the Secretary of State intends to refer the proposed acquisition ... to the Competition Commission ... [and] that no request had been made to the European Commission by the competent authorities.”

This is going to be no re-run of Thomas?Cook and The Co-operative Travel. But why should it? The deal could complete before the end