Rupert Murray finds a seal, a spaniel and a pub revolution as he hits the Devon coast to road-test a new luxury ‘beach hut’ The determined black cocker spaniel swam round and round for 20 minutes without setting feet on dry ground, its tail wagging like a demented rudder. 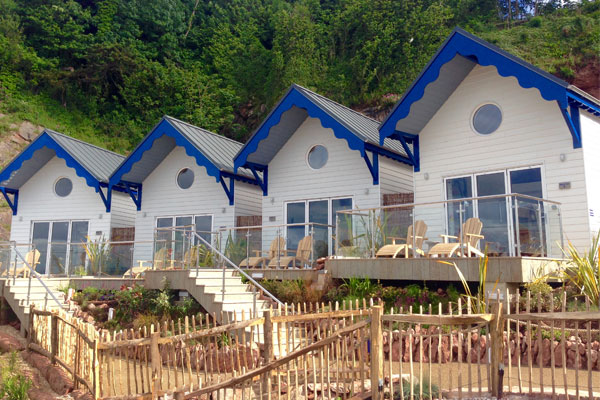 Rupert Murray finds a seal, a spaniel and a pub revolution as he hits the Devon coast to road-test a new luxury ‘beach hut’

The determined black cocker spaniel swam round and round for 20 minutes without setting feet on dry ground, its tail wagging like a demented rudder.

But in this particular battle of wits, evolution was very much on the side of the seal. Sammy (genuinely) popped his head up now and then to keep Fido (probably not) interested but then submerged gaily into the clear Devon waters before any licking could commence.

Children lined the mini concrete pier tearing their wide-eyes off Sammy just long enough to bark demands at their rod-clasping parents to hurry the fudge up and catch more fish.

Said fish were dutifully pulled from the water on one side of the pier, handed to impatient children, and flung into the jaws of the slippery celebrity on the other side.

Sammy seemed content to loll quietly, enjoying this new and improved version of the circle of life. From our lofty table up and back a bit, we watched all this opened-mouthed, occasionally exclaiming things like: “We’re less than four hours from London for Christ’s sake! Why haven’t we been doing this every weekend since birth?!” And: “I suspect I’d be amazing at waterskiing.”

The Cary Arms, on Babbacombe Beach in south Devon, a sheltered marine playground surrounded by imposing cliffs, is probably aimed at us Starbucks-addled Itsu-eating DFLs (Down From Londons) who want a simple, yet snazzy, weekend away.

The most important question to ask of a place headed in a chic direction is would they have been better off leaving it as it was? After all, the location is perfect, the views perfect, the sea perfect, the seal/spaniel cat-and-mouse game perfect. I pondered this question while sat on the decking outside ‘beach hut’ number five, free copy of The Telegraph spread out in front of me.

Number five is a beach hut in the sense that I am a human and George Clooney is a human. But there are a few differences between the beach huts you may have huddled in as a child and these. And indeed, between George and I.

These have a mezzanine level with double bed, a large comfy sofa, a big bathroom with walk-in shower, a sexy coffee machine (not Nespresso though, soz George), a fake fire with optional crackling, a well-stocked Smeg fridge, a ceiling fan the size of a propeller, Sonos sound system and a wall-length folding glass door.

They are upmarket, to say the least, and at £360 a night (B&B) probably ought to be. The spa, which is due to open shortly, continues the snazzolution. It will be, and I quote: “An optimum location for views with the glass-fronted pool and sunbathing deck offering panoramic vistas along the unspoilt Jurassic coastline.

“There will be a series of treatment rooms using leading Parisian spa and skincare brand Yon-Ka with treatments ranging from ‘vital defence’ facials to full‑body Swedish massages and even a men’s facial. For further indulgence there will be an experience shower, aromatherapy jets, a sauna and steam room.” Quite nice, then.

Despite all this jazziness, there’s plenty of good honest seaside pub on show. Upon arrival, the bar lady was sharing her thoughts with a regular on what she might enjoy doing to/with Tom Hardy should he come to stay. Like jump on the Dartmouth Steam Railway from Paignton, for example...

The interior residents’ area has time-worn board games and furniture. And the pool room was that perfect pub size that doesn’t really facilitate the use of cues. These may not sound like compliments, but they are.

Less typically pubby was the food, largely because it tasted really nice. Breakfast can be brought to one’s deck in wicker baskets or taken in the reserved outdoor residents’ area. Lunch was a crab sandwich, and supper the likes of Brixham scallops and Cornish hake. The food is seasonal and uses the best local ingredients, so if you want a microwave lasagne, bad luck.

It’s also worth mentioning that there are plenty of other rooms and cottages with up to four bedrooms.

So if your clients do like to be beside the seaside in style, there probably isn’t a better spot to do it on the south coast. caryarms.co.uk