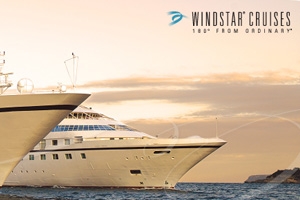 Three smaller Seabourn ships are being sold to the parent company of tall ship line Windstar.

With a capacity of 208 passengers each, the trio of vessels will complement Windstar's Wind Spirit, Wind Star and Wind Surf, bringing the total Windstar fleet to six ships and 1,230 berths.

The delivery of the three all-suite ships will take place over the next two years in the Mediterranean.

Seabourn Pride will be the first ship to enter the Windstar fleet to begin operating in May 2014 following a month-long renovation. The cruises are due to go on sale in May.

Windstar will take possession of Seabourn Legend in April 2015 and Seabourn Spirit in May of the same year.

The deal has been struck between Windstar owner Xanterra and Seabourn parent Carnival Corporation to purchase the three ships. No price was given.

“This expansion is the perfect way to build on the momentum following our recent fleet-wide renovation, providing us with the much-needed capacity to match the accelerating demand for our intimate style of yacht cruising," continued Todd.

“This style is at the core of our guest experience and these ships will be a great addition to our brand."

The fleet expansion will provide Windstar access to new destinations such as Asia and South America, in addition to the 50 countries the company already sails to.

Windstar recently announced a return to Tahiti in May 2014, one of the top destinations requested by Windstar passengers and travel agents.

Windstar's shore-side operations will continue to run out of the company's Seattle headquarters. Additional details, including itineraries, onboard experiences and renovation details will be released in the coming months.

Seabourn is poised to order a new ship as it seeks to maintain capacity following the sale of its three smallest vessels.

The company said there would be no disruption in service or changes in operations on any currently published voyages.

“Our three newest vessels, Seabourn Odyssey, Seabourn Sojourn, and Seabourn Quest have raised the bar for ultra-luxury cruising and we intend to add a fourth ship of similar design.

“Seabourn is already in discussion with shipbuilders and an order is likely to be announced within the current fiscal year. The new ship will allow Seabourn to maintain much of its current gues