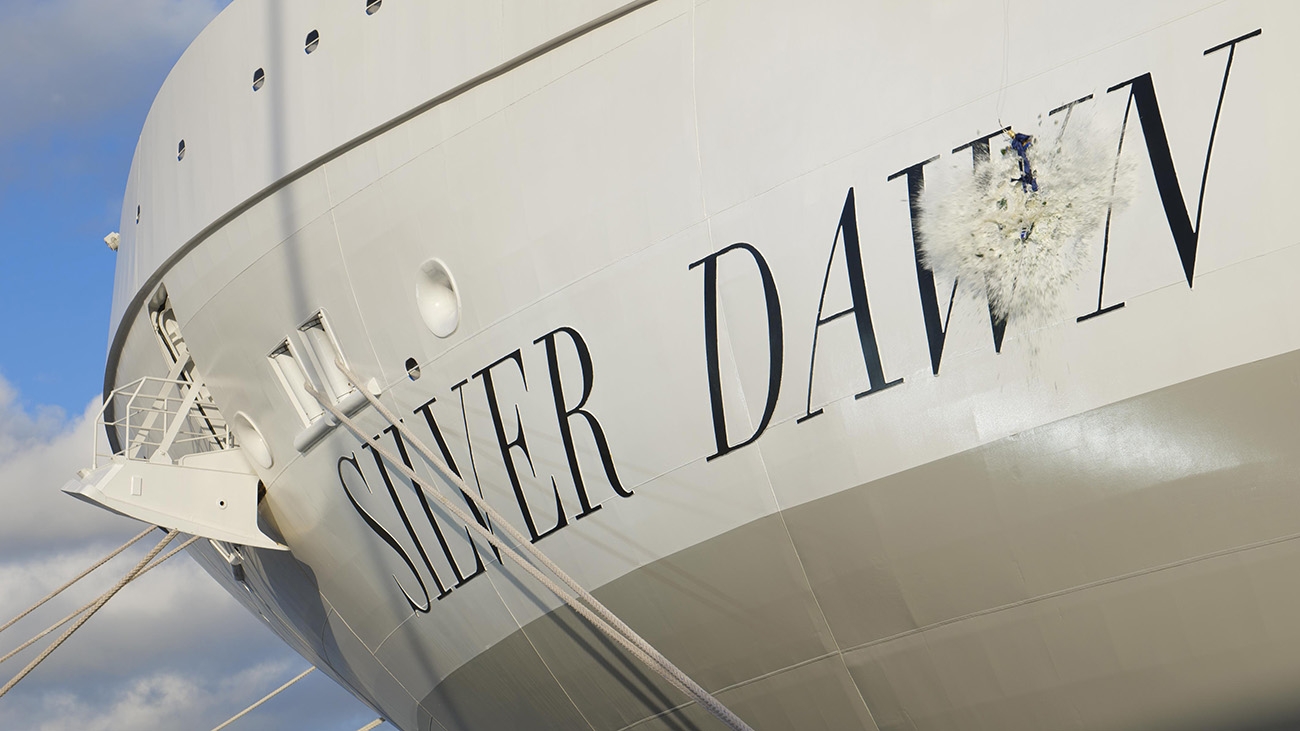 The ship is the luxury line’s third vessel to debut in nine months, joining Silver Origin and Silver Moon, which both launched in June 2021.

Executives from Silversea, parent company Royal Caribbean Group and shipyard Fincantieri celebrated the milestone alongside media and members of the trade with a formal ceremony and gala dinner.

Silver Dawn’s newly named godmother Nilou Motamed, a food and travel editor and television personality, cut the ribbon to trigger a champagne bottle to smash on the ship’s hull, signalling the end of the ceremony.

The launch of Silver Dawn marks the debut of the line’s new wellness concept, Otium, and the second iteration of it’s culinary programme, SALT (Sea and Land Taste).

“I thank and congratulate Roberto Martinoli and our entire team, including Captain Failla and the crew, as well as everyone at Fincantieri, our ship building partners. Silver Dawn is a jewel in the Silversea fleet and speaks to Royal Caribbean Group’s commitment to delivering the best vacation experiences in a responsible way.”

Motamed said: “It’s a great honour to have been selected as the Godmother of Silver Dawn and to have been on board for her naming ceremony in Lisbon.

“Growing up in multiple countries has helped me recognise that one of our deepest common bonds, wherever we go, is food. Like many of Silversea’s guests, I always pair my cultural explorations with culinary ones. That’s why I’ve loved seeing the world through Silversea’s S.A.L.T. programme."

Silver Dawn departs on its inaugural voyage on April 1, sailing from Lisbon to Barcelona. It is scheduled to sail in the Mediterranean until November, when it will cross the Atlantic Ocean, via the Canary Islands, to serve the Caribbean and Central America.

Silversea hosted a total of 100 travel agents on the new ship in the week before its inaugural voyage.

“An evolution of our unique take on luxury, Silver Dawn is the third Silversea ship to be named in the last nine months," said Silversea’s president and chief executive Roberto Martinoli.

“As well as S.A.L.T., our immersive culinary programme, Silver Dawn enriches guests’ travels with Otium, our indulgent new wellness programme, which is inspired by the ancient Roman lifestyle.

“She really is magnificent. I extend my gratitude to Jason Liberty and all involved at Royal Caribbean Group, as well as to the team at Silversea, Fincantieri, and Captain Failla and his crew — our most valuable asset. Moreover, I proudly welcome Nilou Motamed as the Godmother of Silver Dawn.”