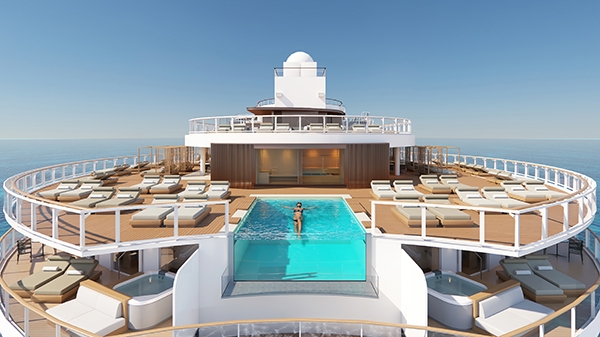 The 3,215-passenger Norwegian Prima is the first of six vessels to be built in the new Prima category and will make its debut in summer 2022.

Speaking on a webcast hosted by Aspire’s sister brand Travel Weekly, NCL president and chief executive Harry Sommer said The Haven had been expanded due to customer demand for luxury, privacy and high levels of service and was “by far” the largest suite complex in the NCL fleet.

Described as a ship-within-a-ship and located on decks 10-17, The Haven features 107 suites at the back of the vessel and an infinity pool overlooking the ship’s wake.

Adding that passengers book the ship from the top cabins downwards, Sommer said: “There is clearly pent-up demand for a high-end vacation.”
Norwegian Prima will also feature the highest staffing levels and space ratio of any new cruise ship in the contemporary and premium cruise category, plus the most outdoor deck space of any new cruise ship.

“Despite the fact that we have not sailed in more than a year, we have not stopped working and even doubled down on investing in our brand to deliver unforgettable guest experiences that go beyond expectations," said Sommer.
“As we’ve begun revving up our operations to begin cruising this July, we’re moved and proud to announce the start of an exciting new chapter in our story of innovation as we welcome the Prima Class and the first in a line of world-calibre vessels with Norwegian Prima.”

Norwegian Prima will sail a series of inaugural cruises in summer 2022 before a season of northern Europe itineraries from Amsterdam.

It will then head across the Atlantic for sailings from Miami, Port Canaveral and New York before cruising back to Europe in 2023 for summer itineraries from Southampton and Reykjavik, Iceland.

Sommer said British agents would be among the first to experience the new ship in summer 2022.

“One of the first places we go to is Southampton, to invite all of our best travel agency partners onboard. Eamonn [Ferrin, vice-president and managing director for the UK, Ireland, Middle East and Africa] has 1,500 people that he can invite," he said.

He added that NCL is working with the port of Southampton to build a new pier for the cruise line.

Uniworld announces its first Rivers of the World cruise