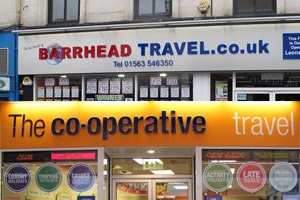 A new 'partnership' between Barrhead Travel and Midcounties Co-op will help protect independent agents on the high street.

Alistair Rowland told Travel Weekly that 'Venture', a new buying group, would be attractive to suppliers since it will drive sales through focused owned distribution.

"If you were a tour operator and suddenly you could drive more traffic through owned distribution like Barrhead and Midcounties, which are largely led by retail, then you would, wouldn't you?

"We will really be able to focus on suppliers in a way that consortia which don't own their members can't. Suppliers are going to like this because they get better reach to a more dedicated audience and we will be underwriting tour operators' trust with longer term deals and focused distribution."

But Midcounties deputy chief executive officer, trading, Andy Cresswell, stressed 'Venture' was not about short-term gains or squeezing a couple more percentage points of commission out of tour operators.

"This is about protecting our growth plan not accelerating it. It's a long term partnership between two like-minded companies and it's about sharing great technology which really helps agents sell and more availability of product.

"This could be really good for suppliers, especially smaller ones."

He also said the 'partnership' was not about trying to attract new members, saying Midcounties' three-year growth plan of 200 homeworkers, 75-80 shops and growing its consortium, which currently has 20 members, by a quarter remained unchanged.

"The heart of all of this was the technology. That's where the conversation started because Barrhead has a system it has built called Nevis which we think is excellent."

He said the conversations with Barrhead then progressed in other ways about how they could help each other and Rowland said the Scottish agency was attracted by Midcounties' strong commercial team.

He said the Midcounties team would look after the top 20 suppliers for the two business, which collectively turnover just under £600 million.

Rowland also said the partnership would see Midcounties selling into Barrhead's directly contracted stock and would give the Co-operative group access to its strong cruise repackaging business and its long-haul tour operation.

He also said Midcounties would be showcasing Co-op Value, its own tour operation, to Barrhead.

Rowland accepted that the announcement was "slightly unhelpful" to Advantage but said setting up 'Venture' was not about "Advantage, Global or any consortia-bashing", rather Midcounties had grown large enough, quicker than it expected, to "sail its own ship".

He said the move did not suggest the old style consortia model was no longer relevant, but added: "Any independent agents with scale will be in a position to take their own choice because tour operators want to have specific relationships with them."

Rowland said there may well be areas that Midcounties could still work collaboratively on with Advantage, "but that's for Julia (Lo Bue-Said, Advantage leisure director) to suggest".