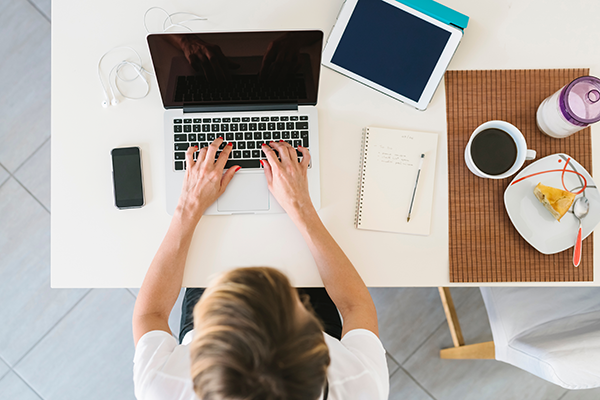 Businesses across the UK and around the world have switched to a homeworking model in recent weeks as they try to help limit the spread of coronavirus.

For some, it’s been a huge adjustment: face-to-face meetings have been replaced by video calls, buzzing offices swapped for quiet homes, and the twice-daily commute has become a distinctly shorter affair.

For others though, it’s business as usual. Particularly among the travel trade, homeworking has long been a popular way of working and there’s plenty of travel agents who have successfully been doing so for a number of years. With working from home set to become commonplace for the foreseeable, Aspire's Erica Bush spoke to homeworkers to get five top tips.

Dan Salmon, managing director at Never A Wasted Journey, said striking the right balance between work and play was more crucial than ever when working from home.

The Essex-based travel agent gets up early to catch up on emails or check any overnight developments on the news so that once his suppliers are open, he’s ready to work straight away.

“It is important, however, to break away from it all - grab that 10-minute break for a cuppa or go out for a walk on your lunch break (for as long as we are allowed to),” he said. “You obviously don’t have people around you for a general chat or to pick their brains as you would in an office, so pick up the phone to fellow agents or suppliers. Just know that you aren’t alone in this and we are all going through this battle together.”

Different Planet Travel’s Clare Levy said it was important to try and avoid being distracted. She advised switching off the television, turning music off and avoiding having Twitter or other social medias up on your computer screen.

When talking to clients in particular, she said consciously removing yourself from situations where your attention might be diverted could be a big help. “This is a big one: If you are talking to a client, look away from your computer, out a window or just away from anything that may pop in,” she advised. “Every email at the moment is a negative one so look away and concentrate on your client.”

She also encouraged homeworkers to set a specific start work time and to focus on one task at a time to ease feeling distracted.

The travel agent urged homeworkers to go about their usual tasks as they would if they were going into an office to boost productivity and stay focussed.

“My routine consists of getting up and dressed, getting the kids ready and off to school (even though this is now at home!),” she said. “I then have a nice long dog walk, eat breakfast and am at my desk from 9.30/10am until 4pm or later, depending on what time the kids need me.”

She added: “I only break for a light lunch and a second dog walk if my work-load permits. If not, I do get out again in the evening.”

In the same way it’s helpful to maintain a morning routine while homeworking, Pippa O’Keefe from Pippa Rose Lifestyle said it was vital that homeworkers retain a dedicated workspace.

“Set up your home office to keep you motivated and focussed,” she said. “Avoid working from your bedroom or social areas if possible. Put out pot plants and your pictures of family, pets or holidays and keep it organised.” If you can, O'Keefe also advises trying to uphold the office environment in other ways too, like dressing for the day.

“Unless your job doesn’t require it, avoid wearing dressing gowns and pyjamas and still get dressed and groomed as if you were going into work,” she explained.

Tip five: Prioritise the mental health of you and your clients

Sam McGuckin from Designer Travel said it was key to look after your mental health by enjoying time outside where possible and staying connected.

“Take time out to get fresh air and leave the phone at home,” she advised. “Also, talk to your colleagues as everyone is feeling the same. It’s important to support each other.”

She also urged homeworkers to be mindful of their client’s mental health when posting online.

“Do not put doom and gloom messages on your Facebook page,” she suggested. “Gauge your clients and ask them what they want from your page. Most importantly, stay in touch with them.”

Lis van Lynden from Haslemere Travel encouraged homeworkers to make a to-do list each day to stay on track.

“Make sure you plan what you do during the day, either the previous evening or early morning,” she advised. “That way, you'll manage to do a lot more and it will feel less overwhelming.”

The travel agent added that it was important to factor in exercise to the daily plan.

“Make sure the list involves getting outside for a walk, run or cycle,” she said. “This is especially important when you are thinking about the best solution to a problem. It's also great to just get out of the house and not constantly think about work. A 20-30min stroll should do it. When you come back, your thinking will be a lot clearer.”

Never A Wasted Journey’s Dan Salmon said a lack of commute and client bookings would more than certainly result in some quieter days for the trade. But rather than scrolling on Instagram or binge-watching Netflix, Salmon revealed he would be using this time to maximise his business and network.

“Make the most of this quieter period and working from home to get all the things done that previously have been put to one side as you may have been too busy,” he said. “This could be your accounts, any updates to websites or general admin so that when it all picks up again you are one step ahead of the game.”

He also advised agents to use the time to keep in touch with clients: “Be it to reassure them for any future bookings or generally to touch base with those I haven’t spoken to for a while to see how they are and to keep on their radar,” he explained.

Wonderluxe Travel revamps website as it considers move to high-street