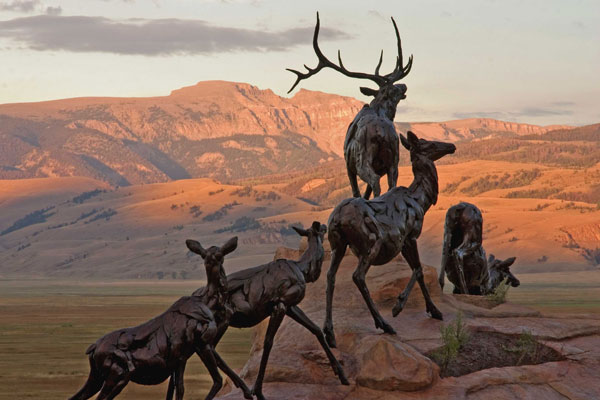 Bison, elk, wolves, geothermal activity – no wonder Yellowstone was the first US landscape with protected park status. As the National Park Service celebrates its centenary, it’s time to seek out America’s wild side.

At first, it looks like a shadow glancing across the top of the mountain. Then it moves. No, prowls, placing one long leg in front of the other, its dark-grey body suddenly impossible to ignore against a backdrop of fresh white snow.

Then a second comes into view, and a third, until with the help of an expert from the Wolf Project – on hand to assist with sightings – we spot seven wolves slinking along the snowy mountain ridge, halfway between Lamar Canyon and Junction Butte in the northern reaches of Yellowstone National Park.

I can’t help but think of nursery rhymes. Who’s afraid of the big bad wolf? All the better to see you with, my dear. Keep the wolf from the door, and the boy who cried – well, you get the idea.

Yet as our guide Carolyn fills us in on the controversial history of how this native species was reintroduced to Yellowstone in 1995, having been driven out three quarters of a century earlier, those childhood stereotypes suddenly seem rather unfair. Carolyn’s tales are half love story, half Mafia-like power struggle, full of alpha males battling for dominance and packs merging or breaking apart as they muscle in on each other’s territory, resulting in today’s population of 121 wolves scattered across the park.

Admittedly I still wouldn’t want to get too close – having them in the sights of my binoculars is quite enough, thank you – but I can see why the Lamar Valley has been compared to the Serengeti. With its delicate balance of predator and prey and animals free to roam as they please, this park is keeping the spirit of America’s wilderness alive.

At 3,500 square miles, Yellowstone is bigger than some entire states, stretching across vast tracts of cowboy country in Wyoming and nudging over the border into Montana and Idaho. It was the first area afforded park status back in 1872, leading the way for the formation of the National Park Service nearly 50 years later, with the aim of protecting America’s vast landscapes for future generations.

The park still fulfils that role to this day, home to countless species of wildlife and some of the most spectacular scenery on the continent. And while the views impress at any time of year, they are even more magnificent with the aid of a few feet of snow.

Take the Grand Canyon of Yellowstone, barely recognisable from its summer photos with a blanket of the white stuff clinging to its steep sides; or the frozen expanse of Swan Lake Flats with the snow-topped Electric Peak in the background.

Yet the animals are the real stars of this show. While the park’s black and grizzly bears hibernate for winter, the rest of the wildlife come out to play. Frosty-faced bison burrow their heads in the snow in search of the last remains of grass below, or trudge across the plains in long, plodding lines, following in each other’s footsteps to conserve energy. Then there are sprightly elk and harder-to-spot moose and bighorn sheep standing proudly on the hillsides.

Rarer still is the ‘three-dog day’, spotting fox, coyote and wolf in a single day. But having spied those wolves from Mollie’s Pack – so named for Mollie Beattie, the first female head of the US wildlife service and the mastermind behind the reintroduction of wolves to Yellowstone – our Tauck tour group managed the hat-trick.

Yellowstone is more than just a haven for wildlife. Home to about 10,000 geothermal features – think hot springs, bubbling mud pools and steaming fumaroles, driven by furious volcanic action below the earth’s surface – it’s one of the few places in the world where you can witness such intense thermal activity.

The most famous is, of course, Old Faithful, the 50-metre-high geyser that erupts with alarming regularity just moments from the doors of Old Faithful Snow Lodge, which means guests can watch the show as often as they like.

Then there’s Roaring Mountain, full of steam vents once audible from several miles away. Now more of a whisper than a roar, they were still powerful enough to send our 21-strong group completely silent as we listened intently to the whoosh and rush of steam pouring out of each vent. And the Fountain Paint Pot, a series of gurgling pools of mud in garish yellow, blue and green, so bright it’s hard to believe they could occur in nature rather than on an artist’s palette.

Those are the ones that make it into the guide books, but the real joy lies in stumbling across unexpected areas of activity: the tiny little geysers that come into view on a walk through the woods, or the hot spring that suddenly rears into life by the side of the road.

This landscape is full of surprises, and feels so far removed from day-to-day life that it couldn’t possibly be the real world: surely such freaks of nature could exist only in a sci-fi movie or on the surface of another planet? (And having doubled as a research base for Nasa scientists looking at what life might be like elsewhere in the galaxy, that notion isn’t so far out of line.)

Yet this is very much the real world, as untouched and untamed as it gets, and a valuable reminder of why national parks actually exist. And as we reach the wide expanse of Hayden Valley, a view even more remarkable than the rest, our guide Paul starts waxing lyrical. He quotes the American author Henry David Thoreau, who famously wrote: “In wildness is the preservation of the world”.

“The longer I stay here, the more this place brings that idea into focus. This is the missing link between us as we live now, and who we really are as a species.”

And the longer I stay, the more I think he may just be right.

Why go in winter?

2. peek performance Animals are easier to spot against the white snow, and wildlife tends to be more concentrated at lower elevations.

3. let off steam Cold temperatures make the steam rising from hot springs and other thermal features even more dramatic.

Any agent selling the US will have been bombarded with enough national parks product this year to put them off nature for life. But the popularity of Yellowstone in winter goes back a bit further, with the number of touring itineraries – the park can only be accessed by snowcoach in this season, so escorted tours are a popular choice – rising exponentially over recent years.

There are sightseeing tours that focus on the park’s scenic side, such as Collette’s Winter in Yellowstone, a round-trip from Jackson Hole that also visits the neighbouring Grand Teton National Park; and tailor-made itineraries from the likes of Abercrombie & Kent, 1st Class Holidays and America As You Like It.

This year that will be down to just one, as Mammoth closes for the next two winter seasons to undergo a much-needed renovation, expanding to include a ski shop and overhauling all guest rooms and public spaces.

That said, Old Faithful Snow Lodge is a very comfortable alternative, with its Scandi-style light-wood decor complemented by rustic fireplaces and a restaurant serving hearty comfort food. This is a national park though, so don’t expect all the usual bells and whistles of a luxury lodge.

Tauck’s Yellowstone in Winter tour bookends the park stay with nights at Chico Hot Springs Resort in Pray, Montana, and The Wort Hotel in winter sports capital Jackson Hole, both of which offer spacious and surprisingly well-appointed accommodation given the relative remoteness of the area.

City life: Aspire’s guide to seeing the best of Sydney