Where do Brangelina, Bill Gates and the British royals go to get their big-five fix? Kenya has welcomed all of these and more to enjoy safaris in its private conservancies and to relax in its coastal hideaways.

Where do Brangelina, Bill Gates and the British royals go to get their big-five fix? Kenya has welcomed all of these and more to enjoy safaris in its private conservancies and to relax in its coastal hideaways. Suggest your clients do the same. 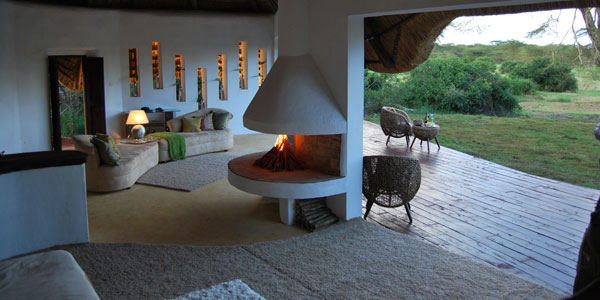 Ahead of me, three red-robed Maasai warriors are outlined against the sky.

Another, our guide Emmanuel, is telling me how he stumbled into the middle of a pride of lions while walking home one night.

We’re on our way up the hill so they can show me how to throw a spear.

And this is just what passes for a pre-dinner stroll at Porini Rhino Camp.

This is luxury on every level. It’s not just that we have comfy beds, en suite showers, gourmet food and a daily supply of sundowners around a campfire, all in a remote corner of Africa.

It’s not even that we’re staying in a camp with only six safari tents, taking game drives across a 90,000-acre wildlife conservancy in the shadow of snow-capped Mount Kenya, and spotting more rhinos than other tourists.

It’s the fact we have the privilege of spending days and days with Maasai warriors as our guides.

Not for us the creeping discomfort of a manufactured tour around a Maasai village, poking our heads into a stranger’s home and guiltily snapping a picture.

Emmanuel and the rest of the team are our oracles, not only when it comes to finding a lion cub in the veld, but also on the topic of how their tribe lives, from diet and initiation ceremonies to how the Maasai are making tourism as much their business as farming and hunting.

Authenticity is a word sprinkled across brochures with gay abandon by tour operators, as luxury clients increasingly say they find gold taps a turn-off and are on the hunt for memory-making experiences instead.

And if you know the right places to look, Kenya has these experiences in spades.

It also has some stunning properties, so while they won’t find anything as tacky as a gold tap, they certainly won’t have to compromise on the quality of accommodation either.

There’s no doubt that Kenya caters well for the mass market.

But the mother of all safari destinations is too savvy to put all her eggs in one basket.

High-end clients need only step a little way off the beaten track to find both safari and beach options worthy of their deep pockets.

Even in the tourist honeypot of the Masai Mara – everyone has heard a few horror stories of minibuses queuing to see a kill – you can find clients their own peaceful corner.

Book camps in the private conservancies surrounding the Mara – especially during the mega-busy months of the migration – the annual exodus of more than a million wildebeest, zebra and antelope species between Kenya and Tanzania.

Conservancies sit outside the official game reserve, but there are no fences in between, so the same game wanders in and out.

The added bonus to being on private land is that laws governing Kenya’s National Parks do not apply, so night drives and walking safaris are on offer.

Another way to find clients the exclusivity they crave is to head for less well-visited areas of Kenya.

The two camps I visited, Porini Rhino Camp and the Cheli and Peacock property Lewa Safari Camp, are on the Laikipia plateau. North of Nairobi, in the shadow of Mount Kenya, this area is made up of wildlife conservancies and tribal lands.

It’s rich with wildlife but relatively poor in tourist numbers, but offers high quality camps including Loisaba and the recently-opened Solio Lodge.

Porini’s camp is in the Ol Pejeta Conservancy, home to four of the world’s eight northern white rhinos.

Guests can visit the groundbreaking project to save the species from extinction, and see the endangered black rhino too, as 67 make their home within the boundaries, carefully protected from poachers by a dedicated team.

The camp has just six unfenced en suite tents, each hidden away from the rest, so guests can watch the sun rise across the plateau from their terraces. Dining takes place in the large central tented area, or under the sky.

Campfire sundowners are the perfect opportunity for stargazing. From the wake-up call with coffee and biscuits before your early safari drive, right up to the warrior escort to walk you back to your tent at night, the service is exemplary and very personal.

Lewa Safari Camp is larger – 12 tents – and fenced, and feels a little less secluded, which may suit clients who don’t like bumps in the night. Central areas are permanent buildings rather than tents, with a stylish lounge area, restaurant and a pool.

But the views across the conservancy in the valley below are just as uninterrupted by signs of human life.

On our bush walks and game drives we rarely saw another soul. We followed two cheetahs until they disappeared into the long grass, without another jeep in sight.

Beautifully decorated, comfortable tents and gourmet food really only scratch the surface of what luxury means on safari. Quality of game, quality of guiding, and a paucity of other tourists are at least as important to a client’s holiday experience.

Happily, you don’t need eyes as sharp as a Maasai’s to spot where all three can be found in Kenya.

The Majlis, LamuOf all Kenya’s luxury options on the coast, The Majlis on Manda Island really is magical. A

The huge, white rooms are divided between two villas built in the local style, each with its own pool and lounge area, and are filled with furniture either made locally or collected on the family’s travels.

Above the restaurant – where the seafood in particular is excellent – the bar has fine views over the channel between the hotel and the picturesque town of Shela.

Dhow sailing boats dip photogenically through the waves daily, at sunset. The Majlis offers the best of both worlds – the unique, personal, one-off touches of a villa, but with an excellent restaurant and facilities, and a smiling staff who can’t do enough to help.

Nearby Lamu is a don’t miss day trip, palpably embodying the vast difference between Kenya’s African heart and its Islamic, Arabian coast. The narrow, bustling streets are filled with donkeys, chicken crates and playing children, and its shops with the wares of local craftsmen.

Q&AWhat are your top luxury lodges in Kenya?“Mara Plains and ol Donyo Lodge, from Great Plains Conservation, are as sustainable as they are exquisite. For something swanky in Samburu, Sasaab is lovely. Shompole sits on the border between Kenya and Tanzania, overlooking the Great Rift Valley. It’s luxury in the middle of nowhere.”
Louise Stanion, Africa product manager, Cox & Kings

Is Kenya for kids?“South Africa’s malarial-free zones are often recommended for family safaris, but they can be very samey. Kenya has well developed and varied family product. I recommend Ol Malo in Laikipia. Kids can have the wildest African time, camping by the river, or rolling in a mud bath, as well as going on game drives. The remarkable memories are sure to last a lifetime.”
Alison Holman, general manager, Rainbow Tours

Would you avoid the Mara to avoid the crowds?“People tend to go to Kenya for the migration, but predators are often their focus, and these don’t actually migrate. There’s a reason the BBC chose to film Big Cat Diary in the Mara – the game is phenomenal year-round. For exclusivity, head for the conservancies that surround the National Park.”
Julian Carter-Manning, director, Africa Odyssey

A stop-off in Nairobi is a mustThere’s a tendency to see Nairobi as merely a necessity – an airport with a city attached. But it’s a shame to make any part of a holiday an exercise in waiting for an aircraft.

If they’ve got a bit of time to spend, suggest your clients visit the home of Karen Blixen, author of Out Of Africa, or get up close to a few of the animals they saw in the wild on safari. T

hey can feel the rasp of a giraffe’s long, dark grey tongue as they feed it pellets at the Giraffe Centre (below), and can coo over baby elephants at the Daphne Sheldrick Elephant Orphanage.

Post-safari, they may just want to hole up in their hotel, in which case suggest the Sankara.

This five-star property opened last year, and is a haven of peace and quiet among the bustle.

The rooftop bar is particularly impressive, with loungers, daybeds and an overhanging pool looking down to the city below.

KENYA WHAT’S NEW?2011-2012The new Naboisho Conservancy is formed from game-rich land on the edge of the Mara. Sustainable tourism group Basecamp Explorer has three eco-lodges within the boundaries, and in July, Kicheche Valley Camp opened there, with six unfenced luxury tents.

Carrier is teaming up with The Born Free Foundation to offer three exclusive Kenyan itineraries next July. As well as staying in some of Kenya’s finest camps, including Governors’ Camp and Joy’s Camp, guests will have the chance to meet Will Travers, son of founders Virginia McKenna and Bill Travers. Contributions will be made to the charity on their behalf.

Sasaab, the nine-room deluxe lodge (below) in the Samburu region, has introduced fly camping to its list of activities, available at no extra cost. Guests first take a walking safari along the river, accompanied by the camp’s camels, before having dinner under the stars and pitching their tents in the wilderness.

The wonders of the Masai Mara