Feature: Land of the rising fun

Tourism is recovering rapidly in Japan, and quite rightly so.

Tourism is recovering rapidly in Japan, and quite rightly so. The Japanese don’t want charity; they want visitors to enjoy their country. And for those looking for that increasingly rare travel pleasure – a culture? shock – Tokyo should be first on the list. 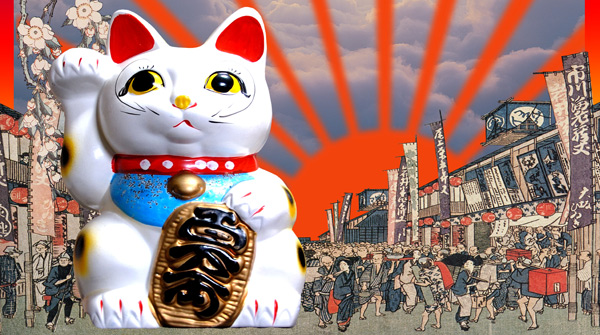 I met a man who owns 30 teapots in Tokyo. And a girl massaging another girl with a plastic fish while wearing a maid’s outfit in an ice cream parlour.I enjoyed meals next to traditional kimono wearers and computer game characters. I supped a hot can of coffee from a vending machine and sat for an hour waiting for a ceremonial cup of tea. I watched acres of men play vending machine games in the hope of winning a plastic toy and marvelled at martial artists spar in the park. I visited a schizophrenic city that pays homage to the most traditional of pasts and the most bizarre of presents. I went to Tokyo – and I’m not certain it wasn’t a dream.

An apologyI don’t much like generalisations but I hope you’ll agree that Japanese tourists tend to take a lot of photographs, often snapping the seemingly most undeserving of objects for posterity.

Having spent four days in Tokyo I would like to apologise to all camera-wielding Japanese tourists. I took 1,100 photos, compelled by all that is weird – wonderfully weird – about this captivating capital.

And it’s big too. Geographically, culturally, spiritually, economically and aspirationally enormous. Even with the best hiking will in the world the city is too big to walk around.

There is no discernible centre, rather a series of centres blissfully well linked by a rail system not dissimilar to London’s in simplicity, but with timekeeping thrown in. That’s a spectacular understatement. Time-worshipping. From 7.32am to 9.30am there are women-only carriages. 7.32.

This reverence for time should be adopted by visitors. Every second is precious because there aren’t enough, and if you’re not careful you’ll spend an entire day staring with your mouth open.

The bizarreAkihabara, the electronics town, took me a day. It’s a sprawling utopia for geeks in a land where being an otaku (Japanese for geek) is perfectly mainstream. Collecting manga cards, for example, is an acceptable pastime for grown men.

Completing the Weird Science fantasy vibe are shoals of girls dressed as maids and schoolgirls inexplicably peppering the streets.

The human mannequins on the streets of Harajuku rival the maids in the extraordinary clothes stakes. Kooky east Londoners would look like stuffy top-hat-and-tails-wearing traditionalists in this melting pot for fashionable faux pas. It’s open-mouth territory again. Combinations of colours, materials and makeup conspire in ever more miraculous ways to create an other-worldly cool.

This haven for hipsters centres around the slim pedestrianised street Takeshita Dori, while the eye-wateringly expensive temple of cool seems to be the five-storey Laforet shop. Nearby, for more mainstream luxury shopping, is Aoyama, home to the finest fashion houses.

Time travelA short stroll from here, past the surprisingly quaint Harajuku station, the intoxicating hubbub fades, the decades shed like leaves and, with unsettling speed, Tokyo’s other face is revealed.

The Meiji Shrine, opened in 1920 in honour of the emperor of the same name, is a welcome reminder of what I like to incorrectly call the Samurai side of life. Here, the vanity of modern Tokyo gives way to tradition, neatness and humility.

The setting is so overwhelming that it ignites in me a ridiculous hope that I’ll witness some old-style kung fu. I don’t, but stunning wedding parades are not uncommon. The entrance alone is striking enough to warrant the trip: an 11-metre-high time machine of a gate constructed from 1,600-year-old cypress trees, followed by a long walk to the temple proper. The Japanese are keen domestic tourists so temples such as this are busy at weekends.

Sumo and tunaOpportunities to take in traditional Japan are plentiful. Sumo wrestling is more a way of life than a sport. There are six two-week competitions during the year, but if your client’s stay doesn’t coincide, a small fee will get them into a stable to watch practice sessions.

Concierges at top hotels such as the Shangri-La Tokyo (review, page 30), which is the newest five star in the capital, can organise this, along with kimono fittings, traditional tea ceremonies and visits to one of the biggest tuna auctions in the world at the Tsukiji Fish Market.

The prospect of an early morning visit may sound unappealing, but the queues to get in tell a different story. Crowds gather from the small hours for one of the 150 sought-after spots. This is home to the finest tuna in the world: one fish was sold for 50 million yen (£420,000) this year. The auction is a flurry of hand gestures and bells.

A visit is worth arranging for a client’s first morning in Tokyo, both to take advantage of the jetlag and also because it gives a speedy insight into just how important food is in Japan.

CuisineThe seasons and their bounty are an integral foundation of Japanese culture. Even young children know what time of year to expect certain dishes, and the idea of eating something out of season is considered bonkers. It also becomes evident that you won’t find an imperfect piece of food anywhere in Tokyo. Every apple, strawberry or doughnut you put in your mouth will be cookbook quality.

This is, after all, the home of Kobe beef, the finest beef in the world. Beef that ruins every other steak you’ll ever eat. If you’ve ordered Kobe on a menu anywhere other than Japan, you were lied to as it isn’t exported. Ever. A farmer of Wagyu cattle, from which the beef comes, might raise only three cows in his lifetime and, the stories go, these cows are massaged and mollycoddled like royalty at a live-in spa. The brand is so protected that diners can request the name of the cow, together with genealogy maps, where it was raised, by whom, its inner leg measurements and so on.

Mix it upPerfection comes at a price, of course, so visitors should be prepared to pay for their pleasures, of which there are many.

We’ve highlighted some places demanding exploration (panel, opposite) and there are lots more.

When selling this city remind clients that the error many tourists make is mistaking history for culture. Much of Tokyo is modern, bizarre and not old – but this is just as vital as the temples and sumo stables for visitors hoping to understand where they are. Snub the bizarre and you miss the extraordinary cultural dichotomy of Tokyo. Or, in plainer English, you miss the point.

In the city’s only remaining geisha district, Asakusa, tourists can be dressed in the classic Japanese style of the shogun era, have professional portraits, then be pulled through the streets in a rickshaw.

Manga and anime drawing classA three-hour lesson at the Yoyogi Animation School to learn how to draw anime cells and moving images. By the end visitors will be able to create multiple frames and start an anime story.

Private guideFor extra insight an expert local guide can be arranged for eight hours. There are also cycling and helicopter tours.

SumoVisits to one of the six annual tournaments or, at other times, to training sessions.

Bonsai classTake a class from a bonsai master at the renowned Shunkaen Bonsai Museum. insidejapantours.com

Places to VisitRoppongiThis appears to be the hangout area of choice for expats, but don’t let that put you off. There are fine restaurants and bars, and, most importantly, plenty of karaoke venues. Roppongi Hills, a giant complex that opened in 2007, is packed with mildly hedonistic delights, the finest of which is the 54-storey Mori Tower’s art museum and viewing platform.

Golden GaiShinjuku’s jewel is a shanty town of tiny bars. Five or so streets of bizarrely named watering holes built to house an average of five or six people. The hardest decision is which to select, although the wildly differing charges, decors and level of welcome soon narrow the options.

Park Hyatt Hotel Level 52If you’ve watched the film Lost in Translation this won’t need explaining. The film has achieved cult status and, in doing so, has elevated the bar at the top of the Park Hyatt to the same level. Expect conversations to revolve around Bill Murray and Scarlett Johansson.?ShibuyaThere are two main reasons for visiting here. The well-known one is the iconic busiest pedestrian crossing (left and page 22). Less-well known is the Tobacco and Salt museum. The photos of Japanese smoking are wonderful.

Mount Takao: This 600-metre-high mountain on the edge of Tokyo feels a lot farther away than the one-hour train journey would suggest. Explorable by cable car or hiking, it is best visited for the cherry blossom or in autumn.

Head to the hills in rural Japan