Escape to the secluded shores of the Philippines

Aman's outpost in the Philippines is an idyllic hideaway of powder-white sands, crystalline waters and pitch-perfect service

The Philippines is a nation of more than 7,600 islands, scattered like a spilt bag of rice over the mirrored surface of the South China Sea and Pacific Ocean. They’re broadly banded into three geographical areas from north to south: Luzon, Visayas and Mindanao. And while its metropolises are sprawling – Manila alone has a population of 14 million people and is the world’s most densely populated city – its coastlines are in a league of their own.

The nation is rightly recognised as a beach lover’s paradise, with an island to suit every palate and pocket, from isolated slivers of sand to spectacular volcanic backdrops that look every bit like the Thunderbirds’ Tracy Island.

While physically part of Asia, it’s very much a land apart from the mainland, with its own cultural identity and spirituality. Catholicism remains the key legacy of the Spanish who occupied the Philippines from the 16th century for 350 years (until they were ceded to America following the Spanish-American War in 1898) and the nation is strewn with vestiges of a colonial era, most notably the ubiquitous stone-cut, whitewashed churches. 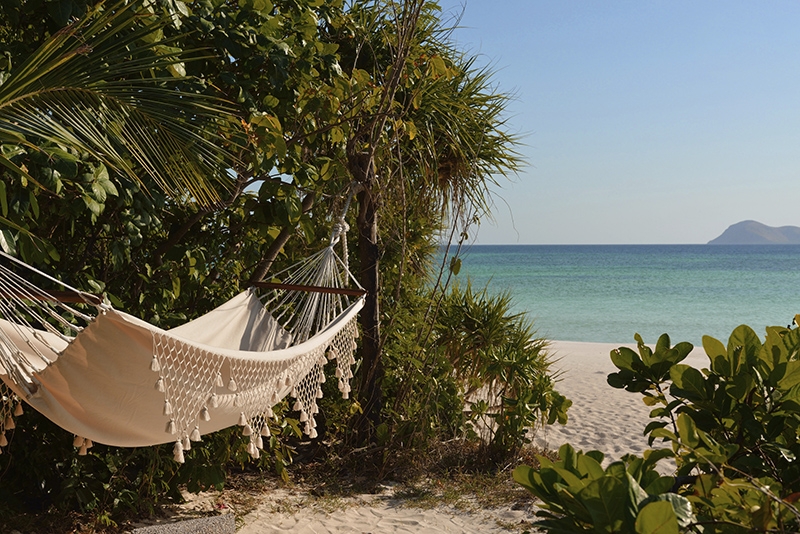 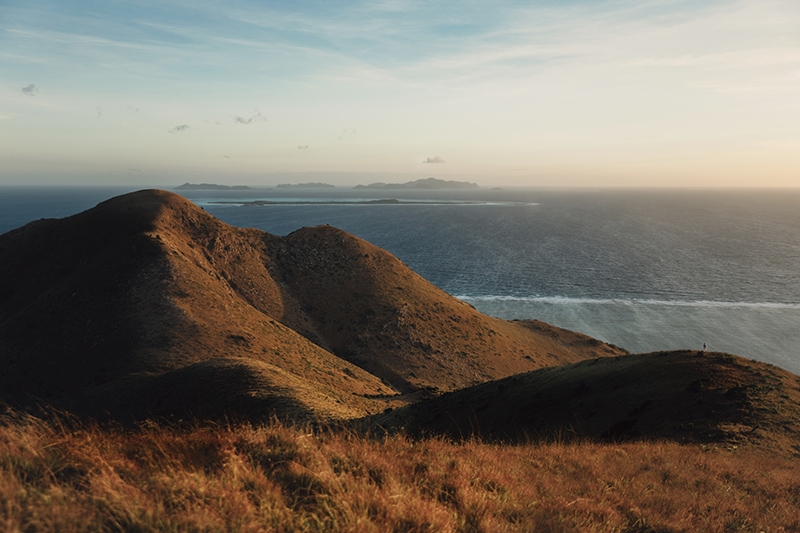 To reach my island hideaway, Amanpulo, the flight route from Manila travels southwards over the Sulu Sea towards the province of Palawan. The hour-long plane journey covers 223 miles, treating me to a bird’s-eye view of Laguna, Cavite, Batangas, Mindoro, Busuanga and the Quiniluban Islands before touching down on Pamalican, a step beyond Palawan’s main islands. A quarter of the islands in the Philippines are found in the Palawan group, but their far-flung dispersal has led to a very real sense of island isolation.

Seen from the air, Pamalican is an elongated island that is almost completely flat. It’s an enchanting little cay, solely occupied by guests of the luxury Amanpulo resort. Just 1.5 miles long and 500 metres at its widest point, it’s easy to circumnavigate at a gentle pace in an hour and a half, spotting harmless baby reef sharks as they meander around the shallows on the island’s south side at high tide.

Standing on an unfrequented beach, ankle deep in talcum-white sand, this kind of escapism intensifies the sense of one-island-one-resort privacy. The blissful isolation is its luxury, recognised by Aman Resorts, which offers a supreme back to nature experience in total comfort. 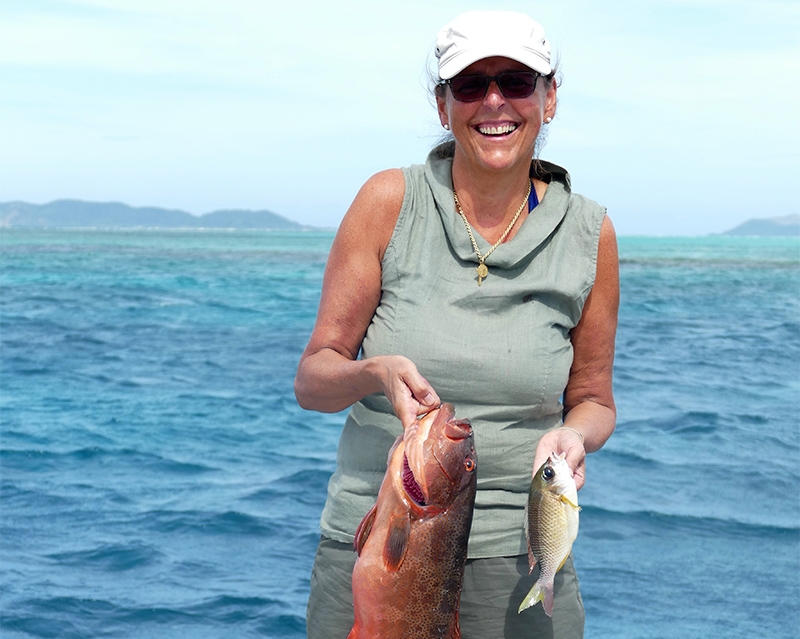 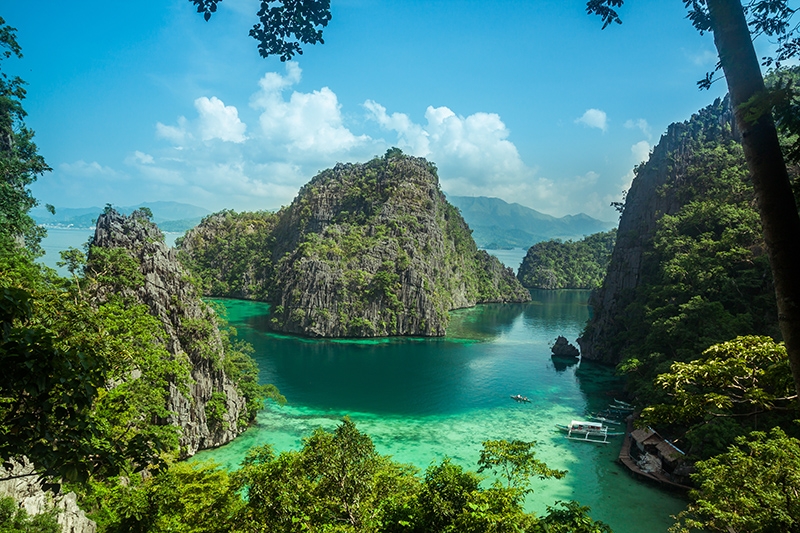 It’s a world away from anywhere, with just 40 airy casita-style lodgings, inspired by traditional Filipino ‘bahay kubo’ stilted houses. Acclaimed Filipino architect Francisco Mañosa says he was inspired by the vaulted wooden ceilings, pebble-washed walls and coconut-shell tables of local dwellings, and has featured these along with large Cebu marble bathrooms, and generous outdoor decks.

Each casita is hidden by a dense cover of forest canopy, either on the hillside or set along a four-mile beach of the whitest coralline sand imaginable, where hawksbill and green sea turtles nest between August and January each year. They lay their eggs at night then disappear back to sea. Staff transfer them to a turtle hatchery for safekeeping, and permit guests to witness the hatchlings being released.

From the shoreline, the island looks empty and the dense jungle that encircles the resort lends a conviviality to the poolside clubhouse. Amanpulo means ‘peaceful island’ and it’s easy to see why, especially at the clifftop spa, which overlooks the island’s 250 pristine acres of vegetation and stretches of beach. 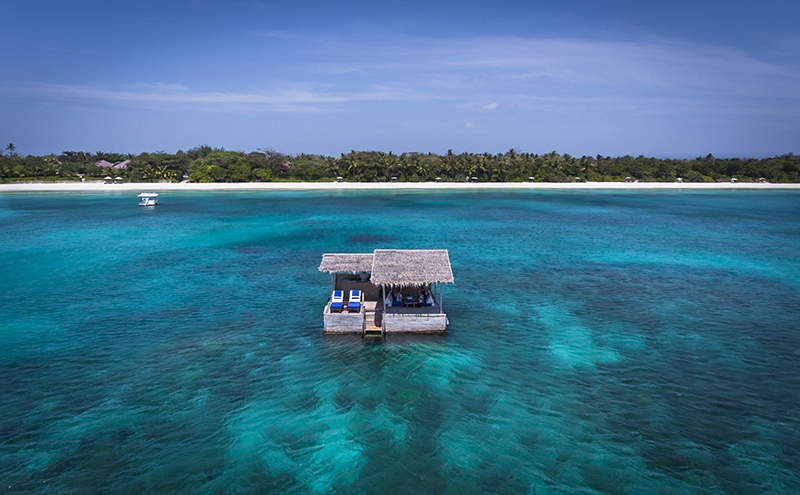 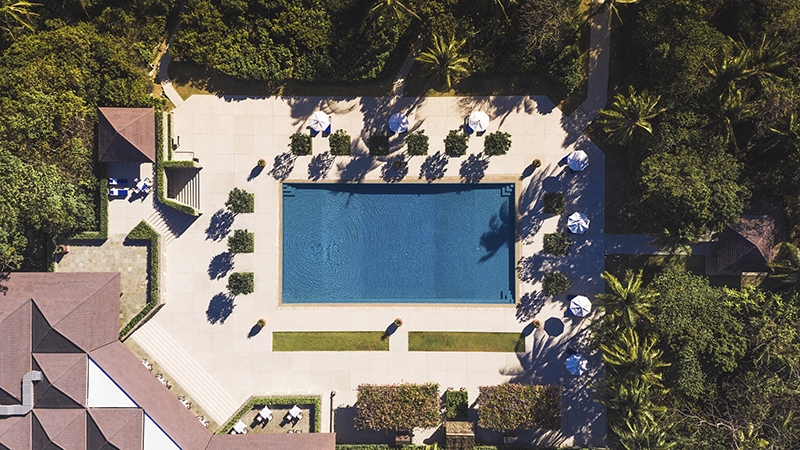 The calm, clear seas are ideal for kitesurfing, but as a diver I opt to explore the coral reef, teeming with marine life just 300 metres offshore. A snorkel around the floating bamboo Kawayan Bar, or from my private beachfront is pretty much all the exertion required to complete a day of lazing, although I make time for a few other diversions including a short island hike to spot the resident owls, and a visit to meet head gardener, Marlin, who has created an amazing organic patch that supplies 40% of the restaurant‘s vegetables, including three kinds of papaya, which are watered via a bamboo irrigation system and protected from bugs with a homemade chilli spray.

It’s easy to travel to the neighbouring islands from Pamalican, allowing me to explore some of the local communities. Just under four miles southwest lies Manamoc, translated as “a place with lots of mosquitoes” (not true during my visit, but it would be wise to protect yourself with a repellent). We approach from the broad, shallow lagoon in the southwest – accessible during certain tide conditions – where I wander for an hour or so along the lengthy spit for some excellent beachcombing, pausing for a rest with a delicious bento box picnic.

It’s a very friendly island, with a simple way of life, welcoming guests in search of a taste of local life, or chasing the adrenaline hit of climbing Mount English, which at 220 metres is the highest point on the island and is a bit of a challenge for hill climbers, as there is no trail for the final stage. 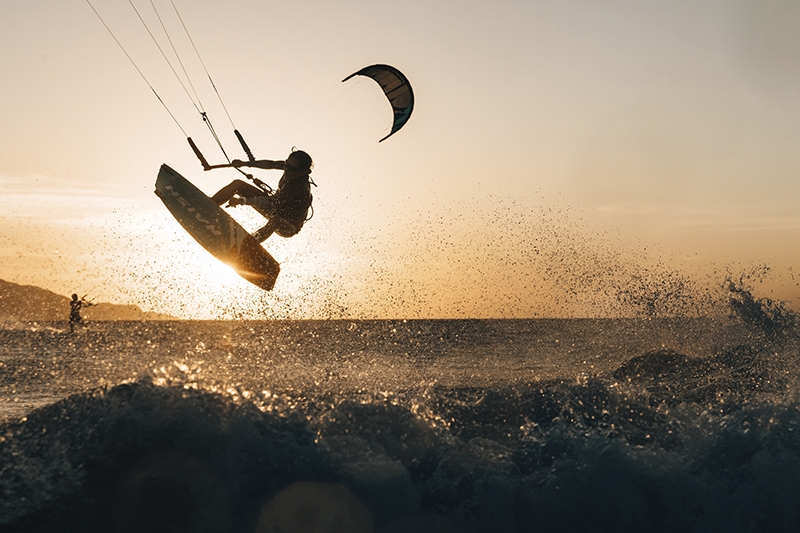 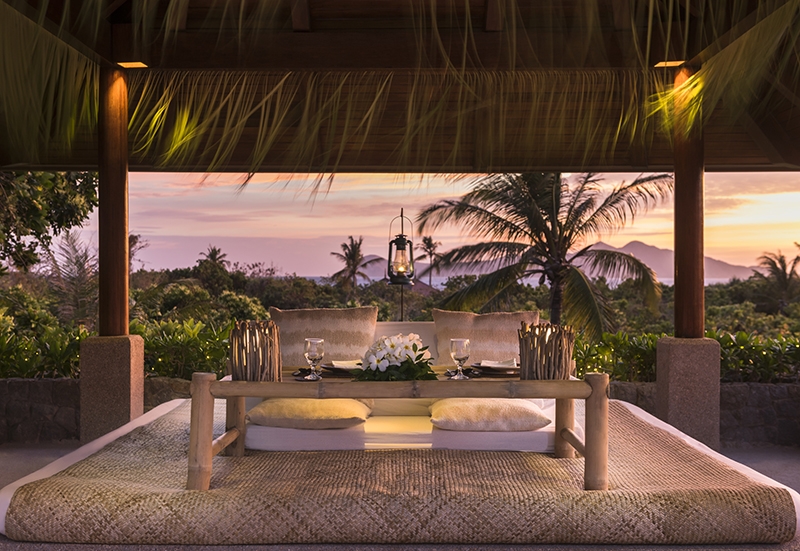 Diving in the Philippines

The view is equally dramatic below the surface and the coral reef surrounding the island is excellent for snorkelling. Some visitors go bottom fishing for snapper and lapu-lapu or troll for wahoo, tuna and mackerel.

The reefs around Manamoc, Pamalican and Tinituan islands are particularly good for diving and snorkelling.

Pamalican Island is a self-declared marine park, a rarity in a country notorious for using dynamite and cyanide to catch fish on its reefs. There are two coasts to dive, the more sheltered western shore, and the open eastern one. The prevailing winds shift seasonally so almost regardless of weather there is always at least one shore available for diving.

While the Philippines’ best diving is further south at the amazing Tubbataha Reefs marine park, this is only accessible by liveaboard. Pamalican Island comes a close second: the house reef is awash with friendly batfish, sergeants, wrasse and parrotfish, and green and hawksbill turtles are often seen close to where the reef descends. Further out, moray eels, scorpion fish, pipefish and many nudibranchs are on show along with blue-spotted rays. As I bask in the water, enjoying the bounteous marine life, I remember the Philippines has more than 7,000 islands for me to explore. Although I’ve dived deep at Amanpulo, I’ve barely scratched the surface of what this paradise has to offer. 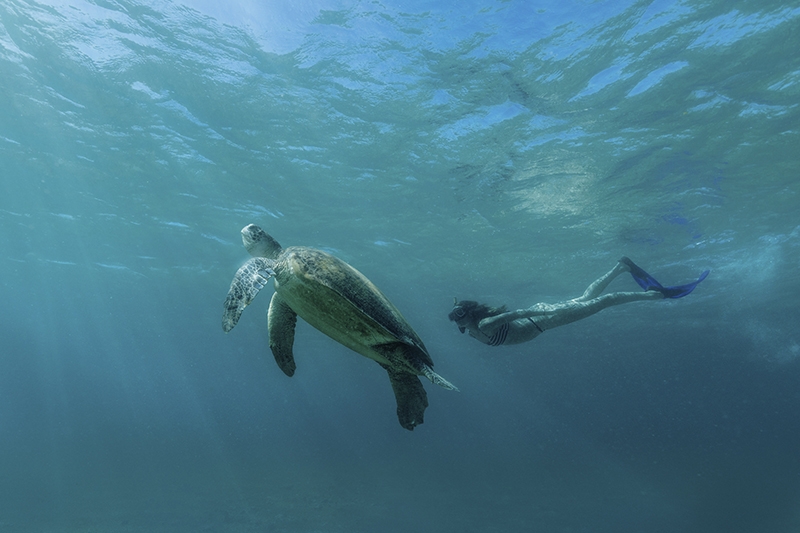 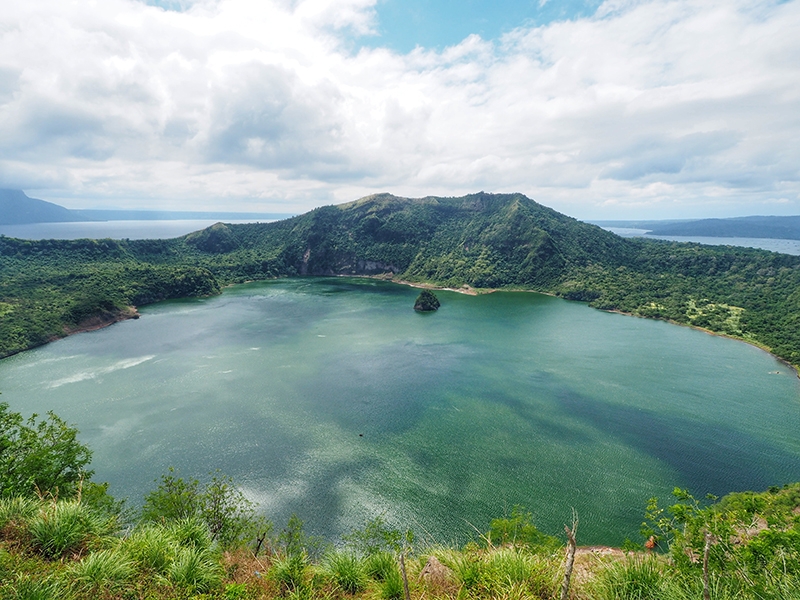 Getting there: The island of Pamalican has its own airstrip and is only accessible by plane. Fly into the Philippines' Manila Ninoy Aquino airport, where you can pick up the scenic 70-minute flight to the island on a 19-seat twin-engine plane (not included in rates; 20kg weight limit per passenger, including hand luggage). Manila is accessed by daily direct flights from most Asian and international gateway cities. Stopover options include Singapore or Bangkok, just over three hours from Manila, or Hong Kong, a two-hour flight from the capital.

When to visit: Generally, the dry season runs from November to May, with scattered showers between June and October. January is usually the coolest month and May the hottest, with an average temperature of about 28C. Pack light clothing with a sweater or jacket for the evenings, sports shoes or plimsolls for walking and a wide-brimmed hat, which is always recommended during the day.

Laguna: Two hours by car or bus from Manila, the small town of Calamba in the Laguna province is the home town of the Philippines' national hero, Dr Jose Rizal. The house that belonged to his family is now maintained as a national museum On the periphery of two extinct volcanoes, sulphur springs gush forth, reputedly imbued with healing powers.

Cavite: At Cavite's highest elevation sits the town of Tagaytay The road there is hewn out of the northern ridge of the active Taal volcano and the town overlooks the volcano's sunken crater lake (pictured) and emerald island, with hawks, crows and an eagle swooping overhead. Several convents and seminaries have made their home here, the prettiest being the rosy­toned chapel of the contemplative Pink Sisters.

Busuanga: The island of Busuanga is home to a variety of wildlife normally found in Africa. In 1977 former president Ferdinand Marcos answered a call to help save endangered African animals. Giraffes, elands, topis, zebras, bushbacks, impalas, gazelles and waterbucks were shipped from Kenya and this place is now a game preserve and wildlife sanctuary. 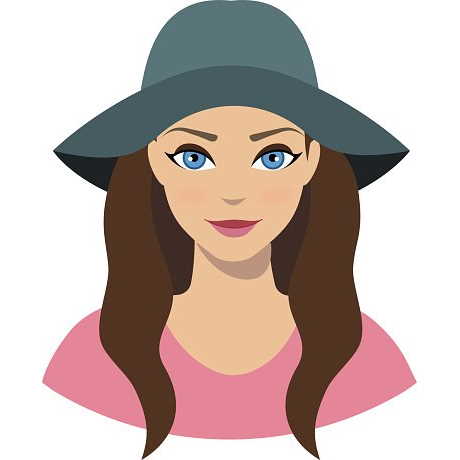