The first thing I notice about the Okavango Delta is the distinct lack of water. 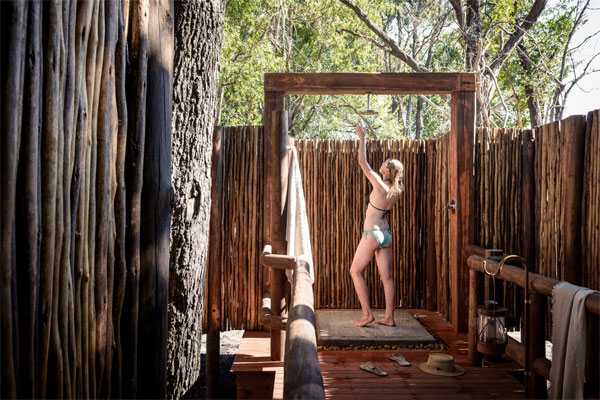 The first thing I notice about the Okavango Delta is the distinct lack of water. This, in an area known as one of the world’s largest inland deltas. Then, slowly but surely, it starts to appear. Soaring overhead in a tiny, single-propeller plane, I watch as aerial views of Botswana’s vast natural wonder unfurl. A verdant landscape pockmarked by palms eventually gives way to hippo-studded lakes and plains bestrode by prancing ostriches and herds of silently plodding elephants. The seasonal flood has arrived.

I’m heading to a camp regarded as one of the best places in the Delta to spot wild game. Opened in 1999, Chief’s Camp stands on an island in the Moremi Game Reserve once used by the prevailing local chief as his private hunting ground. Every year, from May until September, the land on which the camp stands gets encircled by flood water, effectively squeezing the wildlife further inland, making it ever easier to spot them from the camp’s door. This annual phenomenon happens when Angola’s mighty Okavango River floods into Botswana’s barren Kalahari Desert, leaving a giant basin of water in its wake.

Over the past 17 years, Chief’s Camp has earned itself a reputation as one of Botswana’s premier safari lodges. But not content to rest on its laurels, it has recently undergone a wholesale renovation by its owner, Sanctuary Retreats. The safari specialist operates lodges across Africa and farther afield in Burma, Egypt and China. Over the past year, it has revitalised Chief’s Camp, one of four Sanctuary-owned lodges across Botswana, in time for a June relaunch.

As we close in on the camp’s dusty white airstrip, the adventure begins. “Giraffes on the runway!” shouts French pilot Sebastian. “We’ll have to go again.” Giraffes safely cleared, we touch down and embark on the short drive through the bush toward Chief’s Camp.

Loaded up on one of Sanctuary’s open-air 4x4s, which are perfectly adapted to deal with the Delta’s tough terrain, we pass fragrant wild sage bushes, spotting a rare Verreaux’s eagle-owl, a troop of chacma baboons and a herd of elephants enjoying a midday bath. As we approach the camp, zebras and impalas flee from our path.

As the first British journalist to get a behind-the-scenes tour, I start with the 10 rooms that fan out in a horseshoe shape from the camp’s central lodge. But to call them “rooms” is a an understatement; their original floorsize has been doubled to reveal new, stand-alone pavilions, each with their own outdoor plunge pool, poised on expansive decks.

Inside, muslin-draped beds and eggshell baths converge beneath airy thatched roofs. Each has its own quirks – in room three, for example, a giant termite mound rises from the deck – while an additional, all-inclusive, ultra-exclusive super-villa, The Geoffrey Kent Suite, comes with its own chef, butler and guide. This was added to cater for Chief Camp’s celebrity guests, such as Harrison Ford, and those seeking ultimate privacy.

But it’s not only superstars the camp caters for. An on-site guest experience centre will feature evening talks by outside speakers and guides, and a children’s education area will examine plaster moulds of lions paws, among other activities, to give families an immersive experience of the Delta. Couples will be lavished in luxury, from the communal pool and its designer daybeds, to the full-service bar, spa and gym.

But to enjoy all that, guests will have to stay a while, because much of their time will be spent out on morning and afternoon excursions, which come as part and parcel of any Sanctuary stay.

Having spent four nights at two of Sanctuary’s other lodges – Stanley’s Camp and Baines’ Camp – I’d had the chance to experience these activities.

Although each of Sanctuary’s Delta camps has its own distinct character, they are united in their approach to activities. From morning and afternoon game drives, to walking safaris and water excursions on traditional mokoro canoes, guests of Sanctuary Retreats are offered the chance to glimpse Botswana from all angles.

At Stanley’s, a quintessential canvas camp made up of eight tents, I had headed out with experienced guide TT, who has worked for Sanctuary for 13 years. We spotted warthogs snuffling beside sandy roadsides and African fish eagles perching in the area’s strange sausage trees, whose dangling fruit dominates the Delta skyline.

I visited at the start of the flood, travelling mainly by road. When the water really arrives, TT said, they do many of their excursions by boat. In others, 4x4 passengers have to be ready to whisk their feet up to avoid getting soaked, as water regularly rushes in over the sides. That’s the beauty of this ever-shifting landscape – whether you travel during the flood or when the plains are dry, you’re destined for a one-off adventure.

On the first evening, we had a rare sighting of a pack of hyenas, complete with tiny cubs. To watch them frolicking around a termite mound as the sun slipped below the skyline revealed a tender creature seemingly undeserving of its grisly reputation.

But TT did not stop there. Expertly tracing animal tracks across the plains, he led us to a pride of female lions with nine-month-old cubs. Looking at these big cats I knew I was in the presence of something truly wild; yet between one another, they appeared playful as kittens.

Next on TT’s agenda was to spot a leopard and, sure enough, he delivered – tracking a lone female to a remote corner of the Moremi Game Reserve. To the uninitiated, it was near impossible to spot the beautiful creature camouflaged in the long grass. But TT saw her from miles away and pointed her out as she slinked into the sunset.

Not to be outdone, when I moved to Baines’ Camp – Sanctuary’s stilted lodge of five rooms, a short drive away – my second guide Lena, led me to a yet another pride of lions. This time, three females were on a hunt and we also encountered a leopard cub lazing in a tree, with her wide-eyed mother standing watchfully by.

The experience of these guides is the byproduct of a local, community-led conservation project; TT and Lena grew up in the Delta and were employed to use their local knowledge as guides. Baines’ and Stanley’s camps are part of a 260,000-acre private concession, known as NG32, which the Botswana government assigned to six local villages in an effort to turn them away from hunting and toward tourism. The six villages lease the land to Sanctuary Retreats, requiring them to hire a percentage of their staff from the local community in return.

Chief’s Camp has its own dedicated team of staff, but the expert local knowledge is sure to be the same, allowing the Chief of the Okavango Delta to rule once again.

Each of Sanctuary Retreats’ lodges has distinct virtues and to get an overview of the Delta, it’s worth moving around different camps. For example, at Chief’s Camp, guests can take mokoro canoe trips from the lodge’s deck, between morning and afternoon game drives, so they won’t miss a thing.

Because Baines’ and Stanley’s camps are located in the NG32 private concession, they can offer activities that are restricted in the national parks, such as night drives and walking safaris. Guests at these camps also get exclusive access to Sanctuary Retreats’ Walking With Elephants experience (pictured), a partnership with the Living With Elephants Foundation, founded by Doug and Sandi Groves. The Groves are custodians of three orphaned elephants saved from culling in Zimbabwe and South Africa. Sanctuary guests can walk among them, in an effort to educate people about the plight of the African elephant.

Baines’ also offers experiences such as the chance to sleep outdoors on the camp’s raised decks, making it a good bet for couples. Sanctuary’s fourth Delta camp, Chobe Chilwero, is a river lodge, ensuring that you’re surrounded by water, whatever the season – ideal for those travelling when the flood hasn’t arrived.

In partnership with Rhino Conservation Botswana, Sanctuary Retreats is working to reintroduce the endangered black and white rhino to Botswana. Formerly abu

ndant, the rhino was hunted to extinction in Botswana in the 1990s. The Botswana Rhino Reintroduction Project is seeking to bring them back into their native environment, with the help of local military, police, customs and immigration. This means that guests of Sanctuary Retreats in Botswana have the opportunity to see all of the big 5.

Prices at Sanctuary’s Chief’s Camp start from £675 per person per night, based on two people sharing for a three-night stay, with meals and drinks included, game activities, transfers and park fees.