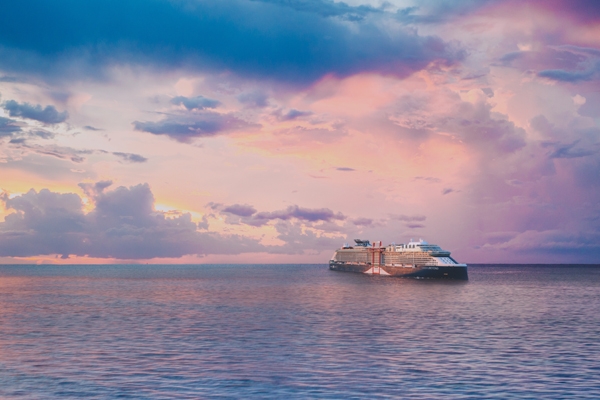 Dining experiences on Celebrity Cruises' upcoming ship, Celebrity Beyond, are set to include the first signature restaurant at sea from French chef Daniel Boulud.

The chef, whose eponymously named restaurant Daniel in New York has two Michelin stars, is the line's global culinary ambassador and will oversee Le Voyage, an “intimate and upscale” restaurant serving dishes inspired by “travel wanderlust”.

The eatery will feature private banquette seating, a dedicated entrance and exit and a farewell gift for each guest.

The venue is one of 32 food and beverage experiences on board Celebrity Beyond, which is expected to launch in April 2022.

The ship will feature 15 restaurants, five cafes and 12 bars and lounges, including a two-storey Sunset Bar on the aft designed by renowned interior designer Nate Berkus. Celebrity Cruises said the space will be nearly twice as large as previous iterations with two open-air decks, a pergola covered entrance and a U-shaped bar.

Mixologists with create bespoke cocktails at the ship’s World Class Bar in partnership with Diageo, one of the world’s largest producers of spirits and beers.

The line has also collaborated with Chicago-based interior design firm Simeone Deary to give its Cyprus Restaurant - present on all Celebrity Edge series ships - a new look, featuring gold sculptures inspired by the Greek goddess Aphrodite.

President and chief executive Lisa Lutoff-Perlo said: “Globally-inspired culinary excellence is at the heart of our offering on board all Celebrity Cruises ships.

“On any holiday, some of your most treasured memories come straight from the dining table you share with friends and family. It matters to us that every aspect of our guest’s onboard experience is truly special.

“We have always put so much attention into our food and drinks, and it has paid off with numerous awards including prestigious recognition from Wine Spectator for setting the standard at sea.

“Now, we have partnered with the most extraordinary talent to put it all ‘on the table’ and create a complete experience without comparison.”

Chef Cornelius Gallagher, Celebrity Cruises vice president of food and beverage, added: “On Celebrity Beyond, alone, we are proud to welcome more than 300 talented chefs from over 30 countries, ensuring we can offer truly global cuisine throughout our stunning collection of new-luxury venues.

“Combined with the remarkable talents of chef Boulud, I know our guests will taste the difference.”

Celebrity Beyond will depart on its maiden voyage on April 27, 2022, from Southampton on a 10-night Western Europe cruise visiting Bordeaux, France; Lisbon, Portugal; and Seville, Malaga, Palma de Mallorca and Barcelona, Spain.

Celebrity Beyond will then offer a variety of Mediterranean journeys including nine-night Italian Riviera and France itineraries and 10-night Greek Isles itineraries through early October, when it then heads to the Caribbean.Voyages are now on sale.